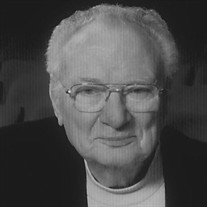 James Elton, "Jim" Rosenau, of East Wenatchee, WA passed away Wednesday, April 22, 2020 of natural causes. His final moments were spent looking out at the flag of the country he fought for, waving over a valley he loved. He was born September 20, 1925 to John and Emily (Kiesz) Rosenau in McClusky, ND. His family moved to Spokane in the early 1930’s. Jim grew up in Spokane, playing football for and graduating from Lewis and Clark High School in June of 1943. Jim served in the U.S. Army during WWII as a Demolition Specialist in the European theater with Patton’s “Tiger Division”, the 10th Armored Division, 55th Engineers Brigade, Company (C) until the war’s end. He then spent additional time in Europe as an MP, and briefly attended Warton American Technical School in Warton, England, then Biarritz American University in Biarritz, France. Jim attended the University of Washington on the GI Bill following the war, then worked with a variety of companies in the Spokane area: Armor & Co. meat packing, Consolidated Collections as a Repo Man, and as a Field Fitter for the Maidenform Company. He met and fell in love with Aileen Yvonne Robinson in Spokane, and in what would prove to be the greatest single decision of his life, asked her to marry him. They were married in October of 1953, (and again in October of 1954). He worked at Pacific Metals in Spokane and later took a role as the Western U.S. Sales Manager for the Aluminum Supply Company of America (ASC) in Spokane, travelling often and working with farmers and growers throughout the Western United States. ASC was purchased by Gifford-Hill in the mid-1970’s and Jim stayed on until 1977 when he took a sales role with Murphey-Favre selling financial and insurance products. Shortly after starting with Murphey-Favre, the family moved to Wenatchee, WA on January 29th,1978 (Aileen’s Birthday). Jim quickly assumed a leadership role in the company, becoming a Vice President in the organization. Washington Mutual acquired Murphey-Favre and Jim retired from Washington Mutual in 1998. A 42-year resident of Wenatchee, Jim was a lover of all sports, playing golf, cheering on the Mariners and the Applesox in baseball, the Sonics, GS Warriors and Gonzaga Bulldogs in basketball, the Seahawks always, the Raiders in the ‘70’s, and the 49ers in the 80’s. When it came down to it though, he was always a true Husky at heart. Balance was achieved and maintained in the home through Aileen’s unrelenting love of the WSU Cougars. He and Aileen supported numerous local charities and organizations. Jim was a member of the Knights of Columbus, Wenatchee Appalarians, the Romeo’s (Retired Old Men Eating Out) and was past-President of the Wenatchee Rotary Club (1983-84). They were longtime members of St. Joseph's Catholic Church in Wenatchee, and attended Our Lady of Fatima while living in Spokane, WA. The family would like to express a heartfelt thank you to the exceptional nurses, doctors and support staff of Confluence Health Hospital & Clinics, Regency Health Center and the exceptional team at Avamere of Wenatchee --- you were all so brilliant and caring! A special thank you to Bob and Karen Colyar, of East Wenatchee, WA, for your love, help and support of Dad in so many seen and unseen ways over the years. Jim was preceded in death by his wife, Aileen Yvonne Rosenau in 2010, his brothers Raymond and Arnold, and his grandchildren Emily and Alyas. A son, Timothy Paul died at birth in 1961. He is survived by his children, Brian, Lisa Sue, Greg (Krysta), Chris (Lisa Lyn), and his brother, Arthur, of Spokane, WA. His grandchildren are Leah (Israel), David, Lennon (Emma), Jeremy, Aaron, Mason and Adair. Jim had two great-grandchildren, River, and Hudson. Additionally, Jim is survived by many dearly loved nieces and nephews. He loved his children, grandchildren, great-grandchildren, and his friends. He adored his wife. He was strong and steadfast in his faith, and today, we rejoice that he and Mom are once again sharing a front row view, this time of eternity. He was larger than life, tremendously funny, Great-Depression hardened, WWII-strong, lived a “Greatest Generation” work ethic and was, most of all, loving and kind. He will be forever missed. In lieu of flowers, donations may be made to KC Help (625 S. Elliott Ave., Wenatchee, WA; Our House-Cancer Care of NCW (1708 Castlerock Ave, Wenatchee, WA); and/or Numerica Performing Arts Center (123 N. Wenatchee Ave. Wenatchee WA) in honor of Jim and Aileen Rosenau. Please share your thoughts and memories on the online guest book at  jonesjonesbetts.com (https://www.jonesjonesbetts.com/obituaries/James-Rosenau/#!/TributeWall) Arrangements by Jones & Jones ~ Betts Funeral Home of Wenatchee, and Evergreen Memorial Park and Mausoleum, East Wenatchee.

James Elton, "Jim" Rosenau, of East Wenatchee, WA passed away Wednesday, April 22, 2020 of natural causes. His final moments were spent looking out at the flag of the country he fought for, waving over a valley he loved. He was born September... View Obituary & Service Information

The family of James E "Jim" Rosenau created this Life Tributes page to make it easy to share your memories.