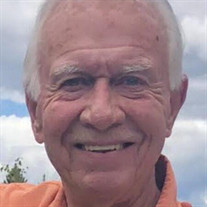 James Edward "Jim" Sayer, 73, with his wife, Cathy, and their children by his side, let go of earthly ties and ran into the arms of his Savior, Sunday, July 12, 2020. He was born on September 11, 1946, in Johnson City, NY. Jim was a Mickey Mantle-loving New York Yankee fan who played baseball in the park all day and stick ball under the street lights, until his mother called him in. The summer of his junior year in high school, his family moved to Sierra Vista, AZ, where Jim graduated from high school. Jim continued his education, earning an Associate of Arts degree from Cochise College, a BS in Social Science Education from Northern Arizona University, a MA in Speech Communication from University of Arizona, and a PhD in Rhetoric from Bowling Green State University. Jim’s career spanned 40 years in higher education, 36 at Wright State University (WSU) in Dayton, OH. He taught speech, rhetoric, media, history, and political science; chaired the Department of Communication for 18 years, served as president of the WSU Faculty for eight terms, and was Dean of Lake Campus his last three years before retiring. He also hosted a weekly public affairs program on WPTD, which received a Regional Emmy, in 1986. Outside of work, Jim had a passion for softball and played three-seven games a week, well into his 60's. Having played college golf, he also enjoyed that game until his last year of life. He coached his children’s tee-ball, softball, basketball, and soccer teams; was as an elder at Kirkmont Evangelical Presbyterian Church (EPC) in Beavercreek, OH; served many nonprofit organizations as board member, parliamentarian, or event host; and was always on hand to assist at the many university-community events facilitated by Cathy in her role as WSU Director of Service-Learning. After moving to Wenatchee, WA, in 2018, to be nearer children and grandchildren, he also served on the finance team at Saddlerock EPC and the board of Serve Wenatchee Valley. People who knew Jim best, saw beneath his quick witted, sometimes crusty exterior to his humble, generous servant’s heart. He knew the names of grocery cashiers and the custodians who cleaned his office, as well as those of the university president or the mayor. As Dean of Lake Campus, he was even known to shovel snow off the sidewalk to the classrooms. He had a soft spot in his heart for cats and could not help himself from feeding strays. He delighted in giving the neighbor boy a soda every time he wandered into the yard and loved to take friends and family out to eat and pick up the tab. Jim was extremely proud of his family and regularly expressed his affection for them, checking in on his kids with phone calls and always being sure to tell them, “I love you a bunch.” In addition to his wife of 52 years, Cathy (Wilson), Jim is survived by two daughters: Lara Sayer (Cory) Young of Alexandria, VA, and Rev. Annie (Joel) Rose of Wenatchee, WA; two sons: James Robert (JoAnn) of Portland, OR, and Stephen Edward (Karine Hermes) of LA; five grandchildren; his mother-in-law, Peggy Wilson; four sisters-in-law; and 11 nieces and nephews, and their families. Jim was preceded in death by his father, Edwin James; his mother, Ruth (Ferry); his father-in-law, Harold Wilson; his brothers-in-law: Tommy Wilson, Roy Gentner, and John Dolaghan; and his niece, Caitlin Dolaghan. A Celebration of Life will be held at Saddlerock Evangelical Presbyterian Church, 1400 S. Miller St., Wenatchee, WA, at 3:00 p.m., on September 11, 2020.. In lieu of flowers, gifts may be made to Serve Wenatchee Valley, P.O. Box 5543, Wenatchee, WA, 98807; or to the Jim Sayer Endowed Scholarship on the Wright State University Foundation’s website or sent to Colleen Lampton-Brill at Wright State University Foundation, 3640 Colonel Glenn Hwy, Dayton, OH, 45435 (checks payable to Wright State University Foundation.)

James Edward "Jim" Sayer, 73, with his wife, Cathy, and their children by his side, let go of earthly ties and ran into the arms of his Savior, Sunday, July 12, 2020. He was born on September 11, 1946, in Johnson City, NY. Jim was a Mickey Mantle-loving... View Obituary & Service Information

The family of James E "Jim" Sayer created this Life Tributes page to make it easy to share your memories.