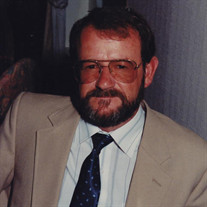 James Samuel “Jim” Vorderbrueggen, 78, a resident of Dryden since 1987, went home to be with his Lord on Monday, September 7, 2020. He was born on May 13, 1942 in Lacrosse, Washington. Jim had a thirty-nine year long career as a Signal Maintainer with the Great Northern Railroad which eventually became the BNSF Railroad. He was a longtime resident of Skykomish, Washington where he was very involved in his community. Among his many activities he served on the School Board, volunteered with the Fire Department as a Fireman, EMT and 1st Responder, and served as the Town Marshall. Jim moved to Dryden in 1987. He married Barbara Anne Howard in 1989. Barbara and Jim square danced with the Appleland Promenaders and bowled with the Eagles Bowling League. He was active with the Railroader’s Picnic and the Railroad Employees’ Club. Jim continued to volunteer in his community like he had in Skykomish. He was an avid hunter and enjoyed camping. Jim was preceded in death by his parents, Ruby and Albert; brother, Don; sister, Mary; and his son, Terry Thorne. He is survived by his wife of 31 years, Barbara; children, Dawn (Tim Moore) Cordell, Tana (Larry) Hill, Heidi (Rich) Monroe, Lisa (Clete) Messerly, Jon (Tracy) Vorderbrueggen, Andrea (Scott) Ulmer, and Dennis Ulmer; seventeen grandchildren; many, many great-grandchildren; former spouses, Bonnie Thorne and June Carol Rees; sister, Linda (Jerry) Russell; and his brother Bob (Sandy) Davidson. Cremation has taken place and Jim’s life will be celebrated in the spring on 2021.

The family of James S. Vorderbrueggen created this Life Tributes page to make it easy to share your memories.

James Samuel “Jim” Vorderbrueggen, 78, a resident of Dryden since...