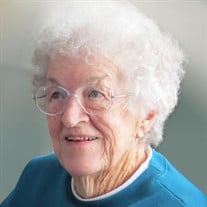 Janet Arlene Kill - Our family matriarch & long time resident of Cashmere, passed away peacefully at her home with family by her side, Wednesday January 22, 2020. Born April 22, 1930 in Wenatchee to Clem and Marie Abercrombie. Joining sisters Dolores & Shirley at the family home in the Stemilt Creek area. She attended Wenatchee schools graduating in 1948. It was during her later school years, Janet was chosen to be the Stemilt Hill Princess, riding the “Slipper shaped Stemilt float” in the Apple Blossom parade. Working as an usher at the Vitaphone Theater, Janet met her future husband, Jerry Kill. Janet and Jerry were married in April of 1949. Making their first home in Wenatchee, starting a family first with Karen, then Dan, Pat, and Jim. Moving to Cashmere in 1959 and then to Tigner Road in 1960. Soon welcoming son Jeff to complete their family of five children. Janet enjoyed being a full time homemaker and mom. She was involved in Camp Fire Girls and Cub Scouts and many school activities with her kids. Among some of the fondest memories are the bi-annual family road trips in the family station wagon visiting most of the states west of the rockies including Canada. Janet was also an active member of the Ardeta Junior Women’s Club for ten years. Around 1969, she started working at the Kashmir Garden Florist & Nursery. Janet and Jerry purchased the florist shop in 1974. She quickly became known as the “flower lady”, caring, sharing and making life long connections throughout the community. The florist shop was a true family affair, the kids were expected to help with everything from; shoveling dirt, watering, planting, and of course delivering flowers all across the valley. Little did Janet know at the time, but she hired two of her future daughters-in-law, Shelly & Sherrie to work with her at the shop. Upon Janet’s retirement Sherrie & son Dan purchased Kashmir Gardens. Owning the florist shop gave Janet & Jerry an opportunity for extensive world travel. Trips to Australia, New Zealand, South Africa, Russia, China and many European countries. Acquiring many long lasting friendships along the way. It was her greatest joy seeing her children and their families grow. Lovingly welcoming grandchildren and great grandchildren under her fold. She taught us the importance of extended family: grandparents, aunts, uncles, cousins and extended cousins. Family reunions happened often and memories were told and retold. She loved these gatherings, as it kept her up to date with everyone and everything. Janet will always be remembered for her strong independence, consistent smile, instilling family values, being loyal, nurturing and caring and making everyone feel like family. She was truly the greatest example of a mother, grandmother, and great grandmother. Janet is survived by daughters; Karen Kill of Cashmere, Pat Tomchick of Cashmere; grandchildren: Damon (Tabitha) Tomchick, Kacee (Michael) Yedinak, and Randee Tomchick. Sons; Jim (Shelly) Kill of Cashmere; grandchildren: Josh (Kristen) Kill, Sasha (Ryan) Waller, & Heath (Elisa) Kill. Jeff (Kirsten) Kill of Portland, OR; grandson: Preston. Daughter in law Sherrie Kill of Blewett Pass. And much loved great grandchildren; Keefer, Sulley, Emma, Duncan, Harlee, Halle, Maia, Jones, Lael, Harris, Madelyn, Henley, Charlotte, Clem, Louis, and Olson. She has reunited with her husband Jerry, son Dan, and son in law Mark Tomchick in heaven. Janet was blessed to share many memorable visits from family, special friend Marla Hills, her “bunco ladies” and numerous others during the last few months. She loved every visit and felt so grateful for her wonderful life. The family would like to extend a heartfelt thank you to the hospice caregivers, respite care and all of those who helped care for our mother. The family is planning a Celebration of Janet’s life, Saturday April 4th @12:00 at Cashmere Riverside Center -201 Riverside Dr. Cashmere, WA.

Janet Arlene Kill - Our family matriarch & long time resident of Cashmere, passed away peacefully at her home with family by her side, Wednesday January 22, 2020. Born April 22, 1930 in Wenatchee to Clem and Marie Abercrombie. Joining sisters... View Obituary & Service Information

The family of Janet A. Kill created this Life Tributes page to make it easy to share your memories.