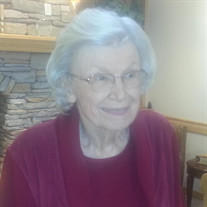 Janie Belle Barb was born April 10, 1930 in Wenatchee, Washington to Lee and Grace (Epley) Barb and passed away July 28, 2021 in Wenatchee. She was named after her two grandmothers – Janie (Mary Jane) Barb and Belle (Arabelle) Epley. Her Grandma Janie thought she was the most beautiful baby she’d ever seen and thought she should be a princess! Janie had two younger sisters, Norma, Gail, and one younger brother, James, who only lived 13 months. Douglas Creek (between Waterville and Palisades) was Janie’s first home with the only other residents there being her Barb grandparents. Later her family moved to Palisades where she met her future husband when his mother was hired to teach in Palisades’ one room school. They rode the school bus to Wenatchee together for their junior and senior high school years. Janie was active in 4H, and became an accomplished seamstress making her own beautiful wedding dress. She continued sewing for herself and her daughter for many years. Janie became a Princess when she represented Palisades in the Apple Blossom Festival while in high school. In 1948, Janie married Robert L. Trotter in Wenatchee where they lived the majority of their married life. They had two children, Kathleen and Lonnie. Janie stayed home during her children’s elementary school years being a room mother and involved in Blue Birds, Cub Scouts, and Camp Fire Girls. Later she worked part-time for a few years each at Multiple Listing Service and Gellatly Insurance Agency. Her interests included Music Theatre of Wenatchee, acting and singing in The Sound of Music, The King and I, and Guys and Dolls, playing bridge with friends, and making and selling beautiful teddy bears. She was an excellent cook and loved cats. Janie was predeceased by her grandparents, parents, infant brother, her husband of 55 years, Robert, mother-in law, Jessie S. Trotter, brothers-in-law Chuck Clark, Tom Grotte, and James Trotter, son-in-law Don Paxton, and one nephew. She is survived by her daughter Kathleen Paxton, Kennewick; son Lon (wife Sue) Trotter, Anchorage, AK; two grandsons John (wife Kimberley) Chambers, Wenatchee and Ryan (wife Tessa) Trotter, Anchorage, AK, and many nieces and nephews. A private family memorial will be held at a later date; interred at Evergreen Memorial Park and Mausoleum.

Janie Belle Barb was born April 10, 1930 in Wenatchee, Washington to Lee and Grace (Epley) Barb and passed away July 28, 2021 in Wenatchee. She was named after her two grandmothers &#8211; Janie (Mary Jane) Barb and Belle (Arabelle) Epley.... View Obituary & Service Information

The family of Janie B. Trotter created this Life Tributes page to make it easy to share your memories.