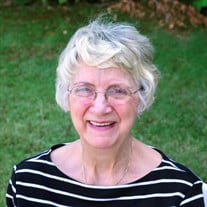 Jeanine Ruth Venneberg of Chelan, Washington died after an extended illness on December 31, 2020 in Wenatchee. She was 80. Jeanine was born on February 8, 1940 to Donald Ralph and Edith Piro. She was delivered by her grandfather Dr. Victor Piro in Chelan. She was the oldest of five children: her beloved brothers being Gary, Don, and Doug, and her beloved sister being Marie (Lucas). Jeanine graduated from the Chelan High School in 1958. She married her sweetheart Martin George Venneberg of Chelan on August 15, 1959. Martin and Jeanine attended the University of Washington in Seattle. Their daughter Dawn Marie was born in 1962 and their son Paul Martin was born in 1966. Jeanine loved her family deeply and found great joy being a wife and mother. Martin’s career with IBM brought Jeanine to Williston VT, Cumberland, RI, Essex Town, VT, and Redmond, WA. After Martin’s retirement in 1991, the couple moved back to Chelan and built a home on the lake where they spent many precious years together. Jeanine’s life was changed by a saving encounter with Jesus Christ. After this, she developed a habit of spending extended time in prayer for family, friends and people around the world. God also gave her a desire to share Christ with others so they too could experience His love and saving power. Though shy, she was involved in leading Bible studies and for a year chaired a chapter of Christian Women’s Club. She furthermore loved to sing and became a member of several church choirs. Beyond this, she also regularly made pies for those living at Regency Manor in Chelan. She is survived by her beloved husband Martin, her two children, daughter-in-law Katalin, three grandchildren (Jonathan, David, and Andrew), three brothers, one sister, and their families. Visitation will be Friday January 15 from 2-4pm and 6-8pm at Jones & Jones - Betts Funeral Home in Wenatchee. The funeral service will be held Saturday, January 16 at 9:30am at Living Hope Community Church at 11 N Chelan Ave in Wenatchee.

Jeanine Ruth Venneberg of Chelan, Washington died after an extended illness on December 31, 2020 in Wenatchee. She was 80. Jeanine was born on February 8, 1940 to Donald Ralph and Edith Piro. She was delivered by her grandfather Dr. Victor... View Obituary & Service Information

The family of Jeanine R (Piro) Venneberg created this Life Tributes page to make it easy to share your memories.

Jeanine Ruth Venneberg of Chelan, Washington died after an extended...