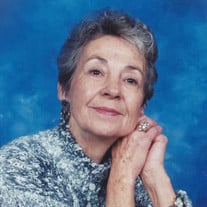 Jessie May McCubbin passed away at the age of 93 in her home of 66 years on Friday, September 17, 2021 after a lengthy battle with cancer. She was blessed to be surrounded by family members when she passed. Jessie was born to George H. Jackson and Martha J. Cook on May 8, 1928 in Three Forks, Montana. She was one of six children which included her brother, Hugh, and four sisters, Georgetta (aka Patsy), Juanita, Doris, and Dolores (aka Tiny). Jessie attended school in Montana and in Chelan, Washington. She graduated from Chelan High School. After graduation, Jessie moved to Seattle and worked as a waitress in a café where she met the love of her life and future husband, Eugene C. McCubbin. They were married in Valdez, Alaska on April 7, 1952. They had two children, Frank Edward and Diana Machelle. Gene and Jessie returned to Washington and settled in Wenatchee where they purchased their family home on Orchard Avenue. In 1957, Gene and Jessie opened the first pizza restaurant in Wenatchee, Gino's Pizza. They owned and operated Gino's on the Wenatchee Avenue for over 30 years. After Gene's death in 1988, Jessie continued to work while attending classes in Ingham Method Reflexology. Upon completion, Jessie became certified to accept and serve clients which she did until shortly before her passing. In 1993, Jessie partnered with her son, Frank, and his wife, Cindy, in purchasing Shelly's Restaurant in the Valley North Mall until December of 2000. Jessie believed in practicing good health and exercise. She loved to read self-help and natural health books. She believed in the power of magnets, crystals, and meditation. She was also a strong believer in the medicinal and health benefits of eating fresh garlic every day. Jessie loved her home and she worked hard to maintain a clean, inviting atmosphere and appearance. She also worked tirelessly to keep her yard, garden, and flowerbeds manicured. Through the years, Jessie was blessed with the opportunity to have three of her grandsons, Josh, Jeremy, and Kyle, and two of her sisters, Juanita and Tiny, live with her. She loved the company! Jessie was preceded in death by her parents, husband, daughter, and siblings. She is survived by her son, Frank (Cindy) McCubbin; grandsons, Kyle (Amy) McCubbin, Jared (Penny Archer) McCubbin, Josh (Nancy) Henkel, Jeremy (Erin) Henkel, and Charlie (Sarah) Grunig; twelve great-grandchildren; and one great-great-grandson. A graveside service will be held in honor of Jessie on Friday, October 15, 2021 at 11:00 a.m. at the Wenatchee City Cemetery, 1804 N. Western Ave., Wenatchee. A reception will follow at the Wenatchee Convention Center, 121 N. Wenatchee Ave., Wenatchee.

Jessie May McCubbin passed away at the age of 93 in her home of 66 years on Friday, September 17, 2021 after a lengthy battle with cancer. She was blessed to be surrounded by family members when she passed. Jessie was born to George H. Jackson... View Obituary & Service Information

The family of Jessie M McCubbin created this Life Tributes page to make it easy to share your memories.

Jessie May McCubbin passed away at the age of 93 in her home...