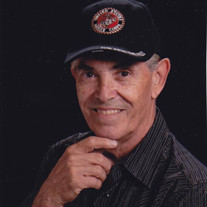 James Ortiz, known to many as Jimmy, was born on November 26, 1946, in Los Angeles, California. He attended and graduated John Marshall High School in Los Angeles, CA. He received both an Associate of Arts and Associate of Science Degrees from Los Angeles Technical College majoring in welding and metallurgy. He continued as a welding contractor until his retirement in 2016. Jimmy served in the US Marine Corp from 1965 through 1969. He served in many areas of the Corp, mainly welding, receiving commendations. He was proud of his service to his country. He taught swimming and gymnastics at the YMCA in Glendale and Hollywood, California. In 1990 he and his wife Sharon moved to Wenatchee where they had a small orchard then developed the property into a seven lot cul-de-sac off Cherry Street, named Rancho Ortiz, and built a home on one of the lots. He served on many community projects such as the Jail Task Force, Habitat for Humanity and as a Deacon and choir member, formerly at Silverlake Presbyterian Church, in Los Angeles and at Saddlerock Presbyterian Church, Wenatchee. Jimmy and Sharon loved to take motorcycle rides, play tennis, and dance. Jimmy was also an avid skier. He played the guitar most every day for his wife's enjoyment and for his own pleasure. Jimmy never turned down a request for help. He was eager to help people and to impart knowledge. He was a great friend and always had a smile on his face or a joke to tell. He will be missed. He is survived by this wife, Sharon, of 34 years; son Jason Ortiz and wife Angella, granddaughters, Teanna and husband Elijah Nixon and Breanna all of Dayton Ohio; stepdaughter Theresa Donovan, grandson Daniel Ryan and wife Rachael, great-grandsons Julian and Finley all of Wenatchee; Grandson Christopher Mallaire of Phoenix, AZ; three brothers Richard Ortiz, Tom Ortiz, Salvador Ortiz and sister Monika Ortiz, all from Southern California. He went to be with the Lord on Tuesday, January 4, 2022. A Memorial Service to be announced.

The family of Jimmy Ortiz created this Life Tributes page to make it easy to share your memories.

James Ortiz, known to many as Jimmy, was born on November 26,...