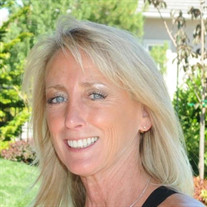 Jo Anne Pearsall September 17, 1955 – March 19, 2020 Wenatchee, WA Longtime Wenatchee resident, Jo Anne Pearsall, passed away on the first day of spring, March 19, 2020, after an extended illness. Jo Anne was born in Omak, WA to Gerald and Dorothy Botchek on September 17, 1955. She graduated from Omak High School in 1974, where she was active in tennis, band and drill team. She attended Eastern Washington University before moving to East Wenatchee. Jo married Charlie Pearsall in July of 1976, and they made their home in East Wenatchee. They welcomed their son, Ty, into the world in April of 1978, and he was the joy of her life. She was a dedicated parent and attended all of his sporting activities growing up. She took Ty to his first ski lesson at Mission Ridge as a young boy, and he still loves skiing and remains active with the Mission Ridge Ski Patrol. Jo loved to read as a child, and that lead to her career of over 40 years at North Central Regional Library, serving as their production manager/graphics specialist. In addition to producing various materials, she annotated and designed the mail order catalogs, and designed the summer reading program materials for the branches. Jo retired from NCRL in April of 2017. Despite serious health issues over the past 15 years, she possessed a selfless character which led her to always come to the aid of family and friends in their times of need. She was one of the kindest people that one could ever know. Jo reconnected with fellow Omak classmate, Dave Hallenius six years ago and they set up residence in Wenatchee. She enjoyed gardening, and they spent countless hours in their beautiful backyard. She and Dave enjoyed traveling, and they were able to take several memorable trips together. Growing up on a small farm, Jo was a compassionate animal lover. While she always had a cat and a dog as companions throughout life, she had a special love of horses. She and her sisters spent endless hours riding throughout the surrounding hills. When she was seven, the girls were surprised one special Christmas morning when Santa brought them a Shetland pony. Jo loved the sun and spent summers as a youth at the family cabin on Crawfish Lake. She loved swimming at Crawfish, Omak Lake, and later swimming and boating on Lake Chelan. No one could argue the fact that she was a sun worshipper. Jo is survived by her son, Ty (and partner Amy Mola) of Sagle, ID; mother, Dorothy Thompson of Wenatchee; brothers, Larry and Ronn (Pam) of Spokane; sisters Kathy (John) Hamilton of Wenatchee and Pat (Roger) Iverson of Snohomish; three nephews and a niece; and her special partner, Dave Hallenius of Wenatchee. She was preceded in death by her father, and brother, Dan. The family wishes to express a deep gratitude to the staff at Confluence Health Rehab Unit, Central Washington Hospital, Chaplain Scott Langager, and the Hospice Team for their compassion and loving support during the difficult times in her life. A Celebration of Life will be announced later. In lieu of flowers, donations may be made to the Wenatchee Valley Humane Society or the charity of your choice in her name.

The family of Jo Anne Pearsall created this Life Tributes page to make it easy to share your memories.