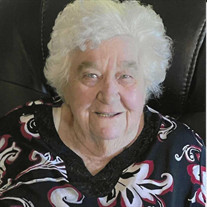 Joanne May Keifer passed into the arms of the Lord on her 90th birthday, February 24, 2022 at her home in Wenatchee. Affectionately referred to as Jo, she was born in Wayside, Kansas in 1932 to Everett and Marie (Bloom) Watson. In 1947 her family moved to Roseberg, Oregon where she met and married Delbert Keifer on December 21, 1949. Joanne is survived by her daughters Sandra (Robin) Swartz of Othello and Cindy Keifer of Wenatchee, granddaughters Kristine Conrad (Ray Johnson), Terrie Swartz and great grandchildren Dejera and Maycee Conrad, Ashleigh and Kellianne Swartz, Michael (Sarah), Layne, Karl, Hailynn and Hudson Hawks, a soon-to-be great great grandchild and sister-in-law Zelda (Keifer) Nickel-Orr of Caldwell, Idaho, as well as numerous nieces and nephews. Joanne was preceded in death by her husband, her parents, her grandson Kevin Swartz, her brother Donald Watson and sister Maxine (Watson) Baker. Jo and Del were married for 70 rich and full years. In 1957 they started their own excavation business, and owned multiple other excavation companies until they retired. Their business ventures took them to rural areas of Eastern Washington, Othello, Plain and Leavenworth. Jo kept the books and ran the office and was known to hop onto a backhoe to dig a ditch or to take the girls into the fields with her to glue and lay irrigation lines. She had a willing spirit and would do anything she had to do, from driving the dump truck to digging up sand to bring home for the girls’ sandbox. Jo worked hard and played hard, and always had an adventure story to share with family and friends. When Jo recounted their escapades, from getting the motorhome stuck on snowmobiling trips to fishing at Illwaco, everyone was in stitches with laughter. Jo even rode her brother in law’s bucking horse that eventually ended up in the Calgary Stampede. She and Del enjoyed many fishing, camping, and hunting trips when they were younger. Another of Jo’s talents and abilities was to prepare a delicious meal, no matter what the occasion. Whether it be a family gathering, a church picnic or a lunch for after-church coffee hour, whatever Jo made was the best! She will be remembered for the wonderful recipes she shared with friends. While living in Othello, Jo was a member of the Othello Christian Church. She, her husband, daughters and son in-law were the first to be baptized in that new church and her grandchildren Kristine and Kevin were dedicated on the same day. Jo also was a member of the Order of the Amaranth, Eastern Star, and Cashmere Presbyterian Church, where she was a Deacon for 6 years. A funeral service will be held at the Cashmere Presbyterian Church at 10:00 am on Saturday, March 19, followed by a graveside service in the Bess Hampton Memorial Gardens in Othello at 2:30 PM with a reception following at the home of Krissie Conrad at 501 East Scootney Street, Othello, also on March 19. The funeral service will be live-streamed through the Cashmere Presbyterian Church Facebook page. Memorial contributions may be made to the charity of your choice.

Joanne May Keifer passed into the arms of the Lord on her 90th birthday, February 24, 2022 at her home in Wenatchee. Affectionately referred to as Jo, she was born in Wayside, Kansas in 1932 to Everett and Marie (Bloom) Watson. In 1947 her... View Obituary & Service Information

The family of Joannie M. "Jo" Keifer created this Life Tributes page to make it easy to share your memories.

Joanne May Keifer passed into the arms of the Lord on her 90th...