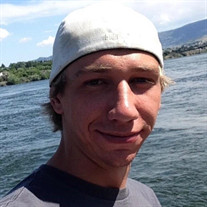 Joel C. Drummond, 32, of East Wenatchee, WA, passed away peacefully on Saturday, January 2, 2021, following and illness. Joel grew up in Wenatchee, Auburn, and Cle Elum, WA, eventually making his home in East Wenatchee with girlfriend Sarah Packer. He worked in retail and the fruit industry. Joel’s passions included music and playing guitar, which he greatly excelled at. He played at multiple venues in a band with brother Shawn and a couple friends, around the Seattle/Wenatchee area. Joel also dearly loved dirt biking. Many weekends were spent as a family at the Olympia WA motocross track. Joel even raced his bike at the Seattle Raceway. When the family moved to Cle Elum, WA, he spent hours on dads tractor building his own crazy jumps and even more hours riding with friends. He even did a jump over his dads truck! Joel also enjoyed spending time with friends, family and girlfriend Sarah. He really liked attending concerts, being outdoors in the sun, the river and hiking in the mountains. He enjoyed helping and hanging out with family. Joel was an easy going, gentle, sweet soul who was always kind to others. He was the guy that everyone wanted to be friends with, “ a smart dude with a ‘cool’ demeanor about him that seemed to draw people in” per brother Shawn. Words can’t describe how much we love and greatly miss him. Joel was preceded in death by Grandma Geraldine “Gerry” and William “Bill” Drummond, Uncle Charles “Chuck” Clayson, and Uncle David “Dave” Drummond. He is survived by his parents James “Jim” and Lisa Drummond of Wenatchee, older brother Shawn of East Wenatchee, maternal Grandparents LeRoy “Pa” and Dianne “Gramma” Bellew of East Wenatchee, niece Shawna and her mother, Jessica “Jessie” Stumpf who he referred to as his “sister”, both of East Wenatchee, nephew Mavrik of Wenatchee, the love of his life of many years Sarah Packer, and numerous aunts, uncles and cousins that he dearly loved. Please join us for a Celebration of Life on Saturday, January 30th at 11:00 AM at Sage Hills Church. Burial services to be announced later this spring.

The family of Joel C. Drummond created this Life Tributes page to make it easy to share your memories.