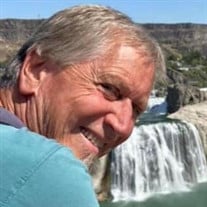 John S Aumell January 9,1955- December 1, 2021 Wenatchee, Washington John passed away on December 1st, 2021 af- ter a brief and sudden battle with an autoim- mune disorder, which ultimately lead to brain bleeding. He was pain free and coherent until the last day. For thiswe are so grateful. John was one of the good guys. His highest priorities in life were God, his family, and helping others. He loved the great outdoors, always ad- miring the beauty of creation. His loyalty to friends was unblemished. The Doobie Brothers were still his favorite band. John retired 5 years ago after a successful career in the marine insurance industry. He enjoyed his retirement by touring many his- torical places, hiking, and spotting elk and wildlife. Going to Califor- nia and visiting children and grandchildren were always highlights. When not traveling, John volunteered. He was very active at the food bank, Catholic Charities, and helping his neighbors, family, and friends. His happiest place was helping- especially with his grandchildren. He is survived by his wife, Susie, who was blessed with 40 years of loving him. His children: Chris (Kelsey), Angie (Dustin Moore), and Libby (Jason Sharp). John LOVED his grandchildren: Savannah (11), Ellie (9), Jace (8), Lela (6), Levi (6), Wyatt (2) and Paxton John (3 months) He is survived by his 6 beloved siblings and their spous- es, as well as his Aunt Thelma, numerous nieces, nephews, in- laws, cousins, godchildren and friends who have become family. The Holy Rosary will be recited on December 9th at 7:00pm at St Joseph’s Catholic Church, Wenatchee. A Funeral mass will be held on December 10th at 11:00am at St Joseph’s Catholic Church, Wenatchee with reception to follow. In lieu of flowers, please consider donations to St Vincent food bank or Catholic Charities- this wouldmakeJohn happy.

The family of John Stanley Aumell created this Life Tributes page to make it easy to share your memories.