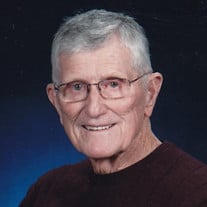 John Hinderer Born September 5, 1933 - Died August 23, 2019 John Norman Hinderer, of Waterville, Washington, passed away in the comfort of the home he built, surrounded by his family on Friday, August 23, 2019, two weeks before his 86th birthday. He was born September 5th, 1933 along with twin brother Paul to E.P. Hinderer and Melinda (Hintz) Hinderer in Waterville, Washington. In the late 1950's, John was stationed with the Army in Stuttgart, Germany. While there he visited family, through which he met Rosemarie Durst. He proposed to her and a year and a half later she moved to Waterville and switched from city girl to farm wife. John started wheat farming while still in his teens and in high school He was passionate about his work. He farmed with his older brother, Mark, and his twin brother, Paul. He was the last of the Hinderer Trio. Farming was never far from his mind. In his spare time he drove around checking on his fields and fellow farmers as well on the conditions of the fields. In addition to farming, John worked many winters in the apple warehouse for Wells and Wade to pay for the house he built. John was an active member of the Lutheran Church and for many years enjoyed being on the church bowling team where he gathered many trophies. John is survived by his loving wife, Rosemarie, of 59 years; son, Martin Hinderer and his wife, Michele; daughter, Bettina de Beer and her husband, Luniel; sister,Olga Irene McNamara; sister-in-law, Lois Hinderer; and his grandchildren, nieces, nephews and extended family. John was an adored father, husband, grandfather, and uncle to everyone. A celebration of life service will be held at 11:00 AM, Friday, August 30th at the United Lutheran Church, 203 S Chelan St, Waterville WA 98858. Interment will be at Waterville Cemetery. Memorial donations may be made to the United Lutheran Church or a charity of your choice.

John Hinderer Born September 5, 1933 - Died August 23, 2019 John Norman Hinderer, of Waterville, Washington, passed away in the comfort of the home he built, surrounded by his family on Friday, August 23, 2019, two weeks before his 86th birthday.... View Obituary & Service Information

The family of John Hinderer created this Life Tributes page to make it easy to share your memories.