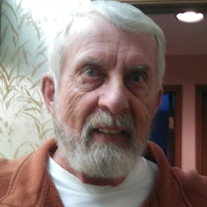 John Edmund Marchant, 75, passed peacefully at home with his family at his side on Wednesday, October 30, 2019. He was born August 24, 1944, in Tonasket, Washington, son of Orval and MaryGrace (Workosky) Marchant. In John’s youth he enjoyed playing Little League Baseball and taking part in Cub Scouts and Boy Scouts. He always had a love for classic hot rods that grew throughout his lifetime. John graduated from Wenatchee High School, Class of 1962. He served in the U.S. Air Force between 1964-1968 at Glasgow AFB, Montana during the Vietnam War. There he served as a jet aircraft mechanic for the B-52 Stratofortress in the 91st Bombardment Wing, where he helped prepare the Strategic Air Command long-range bombers for combat against Viet Cong targets. John was very proud of serving his country. While in the service he married Bonnie Silk which he had three children with Ryan, Rachel, and Rory. On June 27, 1974, John married the love of his life Shelley S. McDonald who he lovingly shared 45 wonderful years with. During their lifetime together they enjoyed dancing and traveling around the state with the three children while playing softball. Around 34 years old John went to work for UPS while staying active in many sports but through the years his love of golf and hot rods (especially muscle cars) became his passions. John enjoyed going to car shows and entered his 1928 Ford Roadster in contests which would place top three many times. He also became fond of snowmobiling with family and friends in the surroundings of the Wenatchee hilltops. He learned how to play Cribbage from his father in-law Tom and looked forward playing him and his brother in-laws Tommy, Dan, and Jamie all day during holiday gatherings. John was taught how to fish by his father Orval and had many good memories fishing with him and others through his life. He retired 25 years later from UPS. After retirement with more free time available, John was involved with more golf and HartBraker Racing as a team member which ran funny cars. This was a passion of his until he could no longer travel with the team. He was preceded in death by his father and mother; several aunts and uncles; and niece Pamela; along with father and mother in-law Tom and Rosie McDonald. He is survived by his wife Shelley of 45 years, his son Ryan and wife Holly Marchant, daughter Rachel Lozier, son Rory Marchant; granddaughters Marina, Loran, and Ashley; and great granddaughter Luna. He is survived by his sister Marlene and husband Bill Chadderton; niece Susan and husband Nick Fox; their children Chad, Mellisa, and Adam; and great-great nephew Tanner. He is survived by a large extended family on Shelley’s side. Friends are invited to share their memories of John with his family during visitation on Friday, November 15, 2019, from 4:00 - 7:00 p.m. at Jones & Jones-Betts Funeral Home, 302 9th Street, Wenatchee, WA. Memorial Service will be held at Saddlerock Evangelical Presbyterian Church, 1400 S. Miller Street, Wenatchee, WA at 2:00 p.m. on Saturday, November 16, 2019. Reception will follow at the church immediately after. John gave to many charities so in lieu of flowers please send donations to the charity of your choice.

John Edmund Marchant, 75, passed peacefully at home with his family at his side on Wednesday, October 30, 2019. He was born August 24, 1944, in Tonasket, Washington, son of Orval and MaryGrace (Workosky) Marchant. In John&#8217;s youth he enjoyed... View Obituary & Service Information

The family of John E. Marchant created this Life Tributes page to make it easy to share your memories.

John Edmund Marchant, 75, passed peacefully at home with his...