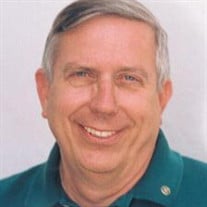 Longtime Wenatchee, WA, resident and businessman, John C. McDarment, 80, passed on to life eternal on Sunday, October 31, 2021, at Harborview Medical Center, in Seattle, WA. John moved to Washington after meeting the love of his life, Betsy, in college and they were married on Mercer Island, WA. While working for Seafirst bank as a trust officer, John was transferred to the Wenatchee Valley, in 1971. He thought it would be a perfect place to raise their family. He left the banking industry to partner with friends to buy Johnson's Inc. After they sold Johnson's, he opened McDee's Art Center and added the Wenatchee Plan Center. After renovating and moving into the old bus depot, he expanded his graphics design business and evolved his businesses into Ridgeline Graphics. John was an active volunteer in the Boy Scouts, Rotary, and St. Paul's Lutheran Church. He enjoyed mentoring many in Scouting and was proud of his three sons and two grandsons all earning the Eagle Scout rank. He was a longtime member of the downtown Wenatchee Rotary Club, serving as President, as well as in other leadership roles. He recently transferred to the Sunrise Rotary Club, so he could serve with his son, Chris. While with the Sunrise Club, he served on the board and was an active member. He was the President of his church congregation, at the time of his passing. John enjoyed welcoming new people to our community. He always found time for everyone, offering an encouraging word, or just lending an ear. He was also eager to help with projects and never hesitated to lead the way. His actions mentored and inspired many. John is survived by his wife of 56 years, Betsy; sons: John W. (Lisa), Chris (Holly), and Logan; and grandsons: Braden and Brian. A Worship Service will be held Saturday, November 13, 2021, at St. Paul's Lutheran Church, 312 Palouse St., Wenatchee, WA. An open reception will be held at Ridgeline Graphics Saturday, November 13, 2021, at 3:00 p.m. You are invited to view John's online tribute at www.jonesjonesbetts.com where you can share a memory. Donations in memory of John may be made in his name to St. Paul's Lutheran Church Building Fund at 312 Palouse St., Wenatchee or to Sunrise Rotary Club through the Community Foundation, 9 S. Wenatchee Ave., Wenatchee, WA, 98801,or online using the "Give Now" link at www.cfncw.org.

The family of John C. McDarment created this Life Tributes page to make it easy to share your memories.