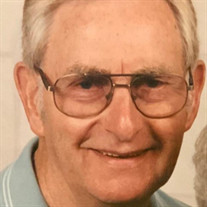 John Spoelstra, 90, a longtime Wenatchee resident passed away on Thursday, September 10, 2020 at Highgate Senior Living. He was born May 30, 1930 in Everett, WA., to Samuel and Alice Spoelstra. He was the youngest of ten children. At the age of two his mother, being five months pregnant at the time, passed away due to pneumonia. His older siblings helped their father raise him. He attended Everett Christian School, North Junior High and Everett High School. In March 1951 he was inducted into the U.S. Army and served until March 1953, when he transferred to the U.S. Army Reserves. On November 20, 1953 he married Beryl Yvonne Pearson and they resided in Everett, WA while he served in the Army Reserves. In October 1956 he was honorably discharged. While residing in Everett, they adopted their first child, Robert J. Spoelstra in 1958 and in 1960 they adopted their second child Judith M. Spoelstra. In 1972 they decided to move their family to East Wenatchee, WA. Eventually they moved to Wenatchee, WA, and made that their final home. He was a General Contractor and owned Spoelstra Construction. Over the course of his life he built many homes in, Everett, East Wenatchee, and the Wenatchee Valley. He retired from Spoelstra Construction in the early 1990’s. He loved taking his family camping and in the early 60’s, he purchased their first travel trailer. They continued to take camping trips until 2015. His faith in God was extremely important to him. He was a member of Everett Christian Reformed Church, Cascade Christian Reformed Church, and eventually Calvary Bible Church. He served as a Deacon and Treasurer for many years. He is survived by his loving wife of 66-years, Beryl Spoelstra, son Robert Spoelstra and daughter-in-law Carolyn Spoelstra, of Wenatchee and daughter Judy Spoelstra of San Diego, CA. He has four grandchildren, Kaitlyn Spoelstra of Cashmere, WA., Kailee Spoelstra of Wenatchee, WA., Kaiden Spoelstra of Yakima, WA., and Evan Spoelstra of San Diego, CA. He was preceded in death by his parents and ten siblings. Graveside service will be held on Thursday, September 17, 2020, at 2:00 pm in the Cypress Lawn Memorial Park, 1615 SE Everett Mall Way, Everett, WA. Due to Covid, a memorial service will be held at a later date. Arrangements are being handled by Jones & Jones, Betts Funeral Home of Wenatchee WA. In lieu of flowers, please consider a contribution to the Alzheimer’s Foundation, alzfdn.org. A cure is imminent.

John Spoelstra, 90, a longtime Wenatchee resident passed away on Thursday, September 10, 2020 at Highgate Senior Living. He was born May 30, 1930 in Everett, WA., to Samuel and Alice Spoelstra. He was the youngest of ten children. At the age... View Obituary & Service Information

The family of John Spoelstra created this Life Tributes page to make it easy to share your memories.