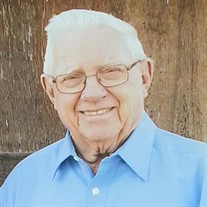 John Charles Zones passed away on Wednesday, June 26, 2019. He was born January 20, 1929, to John Wesley Zones and Mary Anabel Clark on a homestead east of Douglas, Washington. He attended Happy Home School for eight years and graduated from Waterville High School with the class of 1947. John worked as a farm hand right out of high school, until he was drafted into the Army in 1951. He served with the 224th Heavy Mortar Company in the Korean War from January 12, 1951 until December 10, 1952. After he returned home to Waterville, he continued to work as a farm hand until he was employed by the Douglas County Road Department. John was a heavy machine operator for Douglas County until his retirement in 1991. He enjoyed driving combine during wheat harvest for many years after his retirement. On January 30, 1954, he married Esther Eileen Pyeatt in Okanogan, Washington. The newlyweds lived in Waterville and would end up at their “forever” home on Locust Street in Waterville where they lived for over 50 years. They had 3 children. In 2016 John and Eileen moved to Bonaventure Senior Living in East Wenatchee and later moved to Golden Years Adult Family Home. John enjoyed reading, doing jigsaw puzzles, crossword puzzles and upholstery. The family has many memories of him making homemade ice cream in the winter. His favorite sweet was always a bowl of vanilla ice cream. John was a part of a worldwide fellowship of nondenominational Christians. In 1953 he made the choice to follow Jesus’ path and committed his life to God. John is survived by his wife of 65 years, Eileen; his children Don of Cashmere, WA; April Dusek (Darrel) of Libby, MT; and Marla Nation (Calvin) of Marysville, WA; grandchildren Amber (Mike) Herrera, Austin (fiancé Tresha Weyer) Zones, Jonathan (fiancé Felicia Luna) Dusek, Erin (Cody) Lozier, Derrick (fiancé Priscilia Octarina) Nation, Brendan (Emily) Nation, Lacey Nation, Rhonda (Verlyn) Woehl and Troy (Gloria) Dusek; great-grandchildren Arianna, Kai, Mya, Jayden, Aiden, Emmit, Penelope, Asher, Quinlynn, Sofia, Kaitlyn (Shayne), Branden, and Malachi; great-great-grandson Kasyn; and many nieces and nephews. He was preceded in death by his parents John Wesley and Mary Anabel Zones; his brothers Thomas, Wesley, Steven and his sisters Cecelia, Elizabeth and Grace. The family would like to thank Derek Whitehall PA, the caretakers from Advanced Home Health, Hospice, and Golden Years Family Home for their loving and compassionate care. In lieu of flowers, please consider making a donation to the Waterville Ambulance Fund. A funeral service will be held Tuesday, July 2 at 10:00 am at Jones 🙴 Jones-Betts Memorial Chapel. Burial will follow at the Waterville Cemetery.

John Charles Zones passed away on Wednesday, June 26, 2019. He was born January 20, 1929, to John Wesley Zones and Mary Anabel Clark on a homestead east of Douglas, Washington. He attended Happy Home School for eight years and graduated from... View Obituary & Service Information

The family of John Zones created this Life Tributes page to make it easy to share your memories.