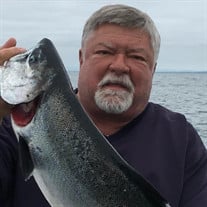 Jon S. Morrison, 70, passed away peacefully at his home on April 13, 2022. Jon was born in Wenatchee in 1951 to Marilyn (Swift) and Robert Morrison. Jon attended Wenatchee schools until his dad's passing in 1962. Jon moved to Cashmere in 1963 with his mom and brothers. Jon attended Cashmere schools and graduated from Cashmere HS in 1969. Immediately following graduation, he joined the Army and left for Vietnam in 1970. He was honorably discharged as a decorated sniper and Purple Heart recipient in 1971. In 1973 he married Patti and had two daughters. Jon later attended Central Washington University and earned a B.A. in Business while simultaneously working at the family machine shop, L.E. Wilson Tools, which he later owned and operated. Jon joined the Cashmere Volunteer Fire Department in 1976 and later became an EMT and Asst. Chief during his 25 years there. He also coached youth baseball in Cashmere for many years. Jon loved fishing and discovered ocean fishing as he neared retirement. It became his passion and he spent many summers in Westport catching Salmon with friends and family. Jon was a man of few words, but he loved fiercely and deeply. He will be remembered for his quick wit, stoic face (especially in pictures) and great love for his country. Jon is survived by his wife of 49 years, Patti; dog, Cece; his two daughters, Jennifer (Bill) Donald and Jaclyn (Dan) Reichert; his four adored grandchildren, Jordyn, Jackson, Ashlyn, and Christian; brothers, Brent, Mike, and Jeff, their wives and children; and his mother-in-law, Shirley Spurlock. He was preceded in death by his mother, Marilyn; father, Robert; step-father John (Jack) Wilson; and brother, Robert (Bob) Jr. In lieu of flowers, donations can be made to the American Legion Post 10, 208 N Wenatchee Ave, Wenatchee WA 98801 Jon’s life will be celebrated on Friday, April 22, 2022 at 2:00 pm at Jones & Jones – Betts Memorial Chapel with a reception to follow at the American Legion Post 10.

Jon S. Morrison, 70, passed away peacefully at his home on April 13, 2022. Jon was born in Wenatchee in 1951 to Marilyn (Swift) and Robert Morrison. Jon attended Wenatchee schools until his dad's passing in 1962. Jon moved to Cashmere in 1963... View Obituary & Service Information

The family of Jon S. Morrison created this Life Tributes page to make it easy to share your memories.

Jon S. Morrison, 70, passed away peacefully at his home on April...