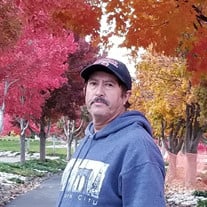 Joseluis Martin del Campo, 59, passed away on Monday, October 11, 2021. He was born on August 19, 1962 in Encarnación, Jalisco, Mexico. Joseluis grew up in Mexico City where he met and later married his wife, Rosalinda. Moved by the beauty and peacefulness of the Wenatchee Valley, he made it his home starting in 1985. Joseluis worked in local orchards for many years and later dedicated himself to construction. He was widely regarded as an honest, hardworking man and was often sought out for his handiwork. Joseluis’s favorite pastime was spending time with his family: helping with a project, teaching his nephews to fish, or watching football with his mother-in-law. He was known for being playful, easy-going, and kind. He loved to make people laugh. Joseluis was an enthusiastic baseball fan and never missed a game, whether it was his son playing or any major league team—especially the Seattle Mariners. With his eye for design, he often created new things out of any materials lying around, such as jewelry for his wife. Joseluis loved being outdoors, gardening, taking creative photographs, collecting coins, and admiring interesting art. He enjoyed working on his 1971 metallic blue mustang and was fascinated by airplanes. He was always eager to try new foods and to learn about other parts of the world. Joseluis is survived by his wife, Rosalinda; daughter, Violeta; and two sons, Joshua and Sean. The second eldest of seven, Joseluis leaves behind his mother, Isidra Romero and siblings, Ricardo, Martín, Octavio, Leopoldo, Marisela and Efraín, in addition to their spouses. Joseluis’s 19 nieces and nephews, three great-nieces and great-nephews, and many more extended family members will miss him dearly. A viewing will be held on Thursday, October 28 at Jones & Jones-Betts Funeral Home from 4-7 pm. Joseluis’s funeral service will be on Friday, October 29 at 11:30 am at Calvary Crossroads Church. An interment service will follow at Evergreen Memorial Cemetery. Friends and family are invited to a reception at Calvary Crossroads at 2 pm.

Joseluis Martin del Campo, 59, passed away on Monday, October 11, 2021. He was born on August 19, 1962 in Encarnación, Jalisco, Mexico. Joseluis grew up in Mexico City where he met and later married his wife, Rosalinda. Moved by the beauty... View Obituary & Service Information

The family of Joseluis Martin del Campo created this Life Tributes page to make it easy to share your memories.