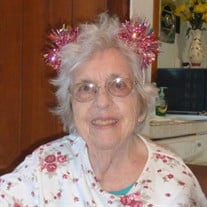 June Wood was born in Pomona, Missouri on June 12, 1929, to Elmer and Olive Wood. She passed on Sunday, June 8, 2019, during the thunder and lightning storm that swept through the Wenatchee Valley. June would often speak of sitting on the porch swing at the home place with her mom and siblings to watch Missouri’s lightning storms. June was one of the rare people who was struck by lightning twice. Once while walking home from school and another time racing home from the milk barn. Mom loved her family. She tested her memory each night with her prayers by reciting all her brothers and sisters and their children’s names. June’s children are Gary Spence of Cashmere, Michael Spence (deceased), Sandra Lynn (deceased), April (Brenda Kay) Spence Brown of Seattle. Her Grandson, Russ Smith (wife Chris) and great-grandchildren, Britney, Baylie and Blake and three great-greatgrandchildren. Granddaughter, Tandie Sears, (husband Jeremiah) and great-grandchildren Carson and Preston Dillard of Wenatchee. June has a twin brother, Junior Wood. His children, Phillip, Bruce, Mark, John, Joyce Wood Harter, Lovina Wood and their mother Nancy Wood (deceased). Evelyn Wood Burgess (deceased): Her children, Betty Burgess Boyer, Royce Burgess, Kathy Burgess Foster, Marvin Burgess, Karen Burgess Shipley, Keith Burgess and their father Lester Wood (deceased). Raymond Wood and wife Mildred Burgess Wood (deceased). Their children, David, Randy, Lee, Jerry, Larry, Karla Wood (deceased). Virginia Wood Rittmiller (deceased), Sharon Rittmiller and Terry Rittmiller. Their father Chub Rittmiller (deceased). Neil and Edith Wood. Neil's twin Nellie May (deceased). Kenneth and Ruth Wood and his children, Patricia Wood Milburn, Sheryl Wood Emery, Carolyn Wood Driscoll, Kenneth Earl Wood, Scott Curtis Wood. Amen. She is preceded in death by her parents and 2 sisters, her newborn daughter Sandra Lynn and her son, Michael James. She married Jim Wilson Spence in 1947 divorced in 1962 (Gary, Mike and Brenda) and married Tom Fitzpatrick in 1966 (Sandra Fitzpatrick and children and Teresa Fitzpatrick and children). It would be impossible to try and acknowledge all the friends she's made and treasured over the years. June stayed in touch with friends from her childhood, her knitting club, crafting friends and employment. We were fortunate she was able to stay in her home as she wished. June had many hobbies over the years. She often said, “keeps me sane”. Weekends were often the time when she spent with her daughter knitting, sewing, weaving and spinning yard while the boys worked on model cars. In her late 30’s she discovered machine knitting and began participating in craft fairs. She made many lasting friends and always looked forward to setting up her shows. June was raised on a dairy farm in Pomona Missouri. She attended Dry Creek Baptist Church where her father Elmer was a lifelong deacon. She went to Pomona Grade School – a one-room schoolhouse. She graduated from Willow Springs High School and attended Wenatchee Valley College. She was the only daughter to go to college. June worked for The Washington State Horticulture Office and retired in her early 60’s. Some of our fond memories are her delicious and fun picnics. June gave good picnics. There was always lemonade, potato salad, fried chicken, and homemade ice cream made in the old wooden green ice cream maker. Our family friends, the Darts, had a cabin up the Entiat Valley and invited our family for a week each summer. The Dart’s owned a classic rustic loft cabin a short walk from the river. We watched the salmon spawn and dug the red and rotten logs for our rock garden, Michael got stung by yellow jackets, deer pawed at the door of her Chevrolet Corvair (the first car she bought brand new), we hauled water to the cabin from the river, the boys built a swimming pool out of boulders – diverting the water for years, and piling in with her in the same bed while the boys slept in the loft with the spiders. She took us down to Malaga before the dam raised the water line to find arrowheads, fossils, thunder rocks and see the native hieroglyphics on the cave and canyon walls. As each new generation was born, our favorite thing was to pile on the couch and lean into mom. Mother gave all of us the love of animals and she loved her cat Wee Willey and Mike’s cat Buddy. Both her cats will be re-homed by Whisker City of Shoreline, Washington. June was a wonderful daughter, sister, mother, grandmother, and friend to many. Special thoughts to Sue Harris, Doug Dillard, Bruce Simpson, Mike Brown, Nancy and Doug McIntosh, Judy Gardner and family, Lucy, and Michelle Burton, James and Margaret Theriault. From one generation to the next she took care of all her people. Because of June, we love each other more. Graveside services will be held at The Wenatchee Cemetery on Monday at 1:00. Gathering following service at Abby's Pizza West.

June Wood was born in Pomona, Missouri on June 12, 1929, to Elmer and Olive Wood. She passed on Sunday, June 8, 2019, during the thunder and lightning storm that swept through the Wenatchee Valley. June would often speak of sitting on the porch... View Obituary & Service Information

The family of June S. Fitzpatrick created this Life Tributes page to make it easy to share your memories.