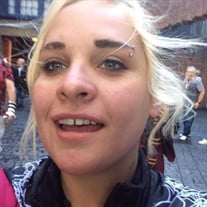 Kamryn “Kami” Larissa Corulli, 27, of Wenatchee passed away on Sunday, February 27, 2022. She was born on November 8, 1994 in Wenatchee to Douglas Corulli and Sandra Corulli (Juchmes). She attended Sunnyslope Elementary, Foothills Middle, and Wenatchee High School. A lifetime resident of Wenatchee, Kamryn danced at Fabulous Feet Dance Studio and even as a young child, was a natural born comedian and artist. Kamryn loved the arts and studied a variety of art media including sketching, painting, ceramics, welding, woodwork, paper mâché, and mixed media projects. Her art can be seen in the mural at the bottom of Fifth St. in Wenatchee near the train tracks, where she painted local bicyclist Tyler Farrar and a child riding a tricycle blowing bubble gum as well as in the hallways of Wenatchee High School including a painted portrait of Mother Theresa. She painted background sets for Fabulous Feet Dance Studio and the drama club for Wenatchee High School. She was awarded Artist of the Year by Wenatchee High School in 2012. She had a love for singing karaoke and would fearlessly belt “Total Eclipse of the Heart” at every opportunity. Kamryn was a devoted employee and manager of Abby’s Pizza in Wenatchee for nine years. She made work fun for everyone who worked under her and served pizza with a smile. She took great pride in her work and serving her customers. Friends and family of Kamryn’s were often surprised to find an impressive sketch and a funny joke on their pizza boxes when they opened them. Her humorous artwork graced the front window of the restaurant for the duration of her time with Abby’s. Kamryn was a comedian. She could find the humor in any situation and could make anyone laugh. She befriended strangers everywhere she went and was well known for bringing a hot meal to several homeless people, many of whom she befriended. Kamryn brought out the best in everyone. She could make you laugh when all you wanted to do was cry. To meet Kamryn was to know her. To know Kamryn was to know kindness and to know compassion. Kamryn never wanted to hurt anyone or anything. She would spare your feelings even if you wronged her and she had compassion for every creature on this Earth. She considered herself lucky to have some of the best friends a person could ask for. Kamryn was diagnosed with lymphoma at the end of 2021 and she fought hard until her passing. She never gave up on herself, just as she never gave up on anyone in her life. She is survived by her parents, Douglas and Sandra Corulli; older sisters Reigan Corulli Stanfield (husband Reese Stanfield and sons Milem and Otto Stanfield), Caitlin Corulli Stuber (husband DaKoda Stuber); brother Stefano Corulli; younger sisters McKayla Corulli and Athena Corulli; and her beloved pug, Cosmo; as well as many aunts, uncles, cousins, and step-grandmother Sharlene Bowes. She was preceded in passing by her paternal grandparents Laurel “Lou” Corulli and Barbara Harris, and her maternal grandparents George and Dorothy Juchmes. Funeral services for Kamryn will be held at Jones & Jones-Betts Funeral Chapel on Wednesday, March 9, 2022 at 2:00 pm. Kamryn loved everyone exactly as they were, please attend in your casual clothes, artistic graphic t-shirts, Abby’s uniform, or simply come as you are. Messages of love and support can be left at Jones & Jones-Betts website at www.jonesjonesbetts.com.

The family of Kamryn "Kami" Larissa Corulli created this Life Tributes page to make it easy to share your memories.

Kamryn “Kami” Larissa Corulli, 27, of Wenatchee passed away on...