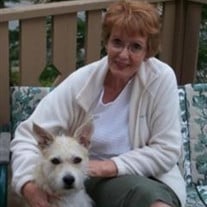 Karen D. McCown passed to the other side, Wednesday, July 14, at her home in Wenatchee Washington. She died peacefully in her sleep due to complications from Alzheimer’s disease at the age of 80. Born Karen Diane King on January 6, 1941, in Pomona California, she was the first of two children born to William and Lela King. She spent her early years tormenting her younger brother, Larry. We aren’t sure if this was rightly deserved or if she just found an adolescent comic pleasure in, for example, hiding in the closet and scaring him, which apparently has affected him to this day. Thanks for that, Mom, the torment has carried downhill. Karen met Allen “Mack” McCown in 1958 at their high school graduation party, held at the recently opened Disneyland in Anaheim California. They attended Chaffey High School in Ontario California at the same time but never met until their double date for the party at Disneyland. The first ride they went on was “Mr. Toad’s Wild Ride”. Fifty-one years later, on Mack and Karen’s fiftieth anniversary, the McCown siblings and families took them back to Disneyland for a four-day celebration. The first ride we all took together was Mr. Toad’s Wild Ride. We are grateful for the laughter-filled, wild ride our parents provided for us over the years. Karen was a very gifted, yet humble artist. She showed signs of her artistic talents early on, as the Art Editor for the Chaffey High School yearbook, where she designed the cover and interior pages for the 1958 edition. She was an exceptional tole painter during its heyday in the 1970s. She sold her work in Wenatchee at various festivals such as Apple Blossom and had a following from out-of-towners who would return yearly to buy her work. Some of her work can even be found internationally. Karen also painted canvasses, her favorite subject being old barns and farmhouses, and designed and created amazing quilts. She also taught painting classes in her home. During the 1990s, Karen donated her skills, knowledge, and time at the Central Washington Hospital, as a retail buyer and display designer for the gift shop. Mom was also a dedicated interior decorator. She possessed the ability to re-arrange an entire living room without family witnesses. As kids, we would go to school and come home to discover Mom had seemingly levitated heavy couches, bookshelves, and appliances while we were away. She would have given Helen Keller fits. She was also a master with wallpaper, including epic treatments of wallpapering the fridge. She loved to draw floor plans, and, in fact, she designed the architecture of their Forest Ridge home near Mission Ridge. In addition to being a whiz at crossword puzzles, regularly putting the New York Times to shame, Mom loved to work on jigsaw puzzles, which became a family tradition to solve multiple puzzles together over the holidays. She enjoyed puzzling up to as recent as 2020. Mom had a truly great sense of humor, essential for putting up with our family’s sarcasm, tomfoolery, goofy hi-jinks and so on. She was an avid movie-goer, and what a blast it was to go see a comedy with her. We all would laugh until it felt like we had done a million and six sit-ups. Mom loved traveling on road trips with Dad, visiting numerous western U. S. National Parks, her favorite being Bryce Canyon in Utah, where she requested that we spread her ashes. Mom and Dad also visited England and Scotland, “James Herriot country” as she put it, being a fan of his books about an English countryside veterinarian. She truly loved all creatures, great and small. Well, maybe not a fan of spiders. But her love of animals brought many, many adored pets into our home over the decades, and her compassion was impressed upon the rest of our family. Mom is survived by her four kids— Cory, Tod, Jeff, and Amy; her beloved dog Sophie; three grandkids— Conner, Lauren, and Dylan; and her poor tormented brother Larry King of Bullhead City Arizona. A memorial service celebrating Mom’s life will be held at Wenatchee Golf & Country Club, 1600 Country Club Dr., East Wenatchee, Sunday, November 21, at 1:30 pm. In lieu of flowers, the family requests that charitable donations be made in her name to any Alzheimer’s foundation, such as the Alzheimer’s Association (act.alz.org); the Humane Society, or the charity of your choice. We miss you, Mom, we have for several years now. Anyone that has endured loved ones with Alzheimer’s will understand that sentiment. Mom, enjoy your afterlife and know you are loved. The beautiful irony is that our loss is Mom’s reunion on the other side, and the release from her disease. An Irish blessing: May the blessings of Light be upon you, Light without and Light within. Cheers.

Karen D. McCown passed to the other side, Wednesday, July 14, at her home in Wenatchee Washington. She died peacefully in her sleep due to complications from Alzheimer&#8217;s disease at the age of 80. Born Karen Diane King on January 6, 1941,... View Obituary & Service Information

The family of Karen D. McCown created this Life Tributes page to make it easy to share your memories.

Karen D. McCown passed to the other side, Wednesday, July 14,...