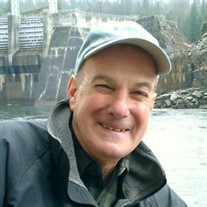 The family and friends of Kim Palmer de Rubertis mourn the passing of this exemplary and exceptional man. Kim was born in Kansas City, MO, on November 24, 1937. He was the first of three children born to William Joseph and Marjorie (Palmer) de Rubertis. Kim's father was a professional cellist at the time, playing in the Kansas City Symphony and teaching at the Kansas City Orchestral Training School, which was under the leadership of Kim's grandfather, Dr. Nazareno de Rubertis. During World War II, the family moved to Sandusky, OH. After the war, they moved to Lawrenceburg, IN, and then to Catonsville, MD. Kim graduated from Catonsville High School and was granted a scholarship to attend Colorado School of Mines, where he graduated with a professional degree in geological engineering. Throughout his high school and college years, Kim was an exceptional athlete, playing both soccer and baseball. He also held jobs throughout his academic career and served in student government. Kim married Barbara Kay Lehde on August 19, 1961, and they began their life of adventures. While Kim served in the Army Corps of Engineers, he was stationed at Fort Belvoir, VA, Fort Riley, KS, and the Naval Amphibious Warfare Training School in Coronado, CA. After serving in the Army, Kim and Barbara moved to Cincinnati, OH, where their first son, Corbin Palmer de Rubertis, was born. In 1965, Kim went to work for Harza Engineering Company in Chicago, IL. The family frequently traveled with Kim on domestic assignments. In 1967, the family moved to Iran, where for several years, he worked as resident manager for a dam being constructed on the Karun River. During this time, a second son was born to Kim and Barbara, Benjamin William de Rubertis. In 1972, the family moved to Ann Arbor, MI, where Kim was resident engineer for the reconstruction of three dams on the Huron River and then to Bacova, VA, where Kim was resident manager during the investigation, design, and construction of a large pumped storage facility. In 1974, Kim took the position of resident engineer for the addition of a second powerhouse for Rock Island Dam on the Columbia River. Kim's family moved to Cashmere, WA, bought their first house, and settled into the wonderful community that would be their permanent home. In 1976, Kim went into private practice as a consulting engineer, working on both domestic and foreign assignments. He was a dam engineering professional, but he also served the community pro bono whenever someone needed help with a water well or a foundation. He would often perform these services in exchange for a donation to Children’s Hospital. Also as a commercial construction arbitrator and testifying expert, Kim enjoyed helping people settle disputes. During these years, Kim also devoted time and expertise to passing on knowledge to the next generation through volunteer teaching stints at various universities, teaching classes at the offices of a number of utility districts, federal regulatory agency offices, and power companies and through mentoring young engineers as they began their careers. He published papers, gave presentations at conferences, and served on several ASCE committees that produced handbooks and guidelines for dam engineering. Kim was particularly concerned with the role of human error in dam safety. In 2016, the United States Society on Dams (USSD) gave Kim their Lifetime Achievement Award, recognizing his 54 years of civil, geotechnical, and construction engineering experience and service. The same year, he was awarded the Rickey Medal by the American Society of Civil Engineers (ASCE) for contributing to the advancement of knowledge in the field of dam engineering and safety assessment and for capturing the state of the art in technical guides. Kim was preceded in death by his parents, William and Marjorie de Rubertis; and by his brother, John Derek de Rubertis. He is survived by his wife of 58 years, Barbara de Rubertis; his sister, Wendy Anne de Rubertis; his sister-in-law, Tess de Rubertis; his son, Corbin, Corbin’s wife, Kathleen, and their children: Frances, William, and Celeste; and his son, Ben and his children: Benjamin and Emma. At Kim's request, his family will hold a private celebration of his life at a future date. Donations in Kim's memory may be made to Uncompensated Care at Children's Hospital in Seattle, WA, an organization he generously supported over the years, at 4800 Sand Point Way, Seattle, WA, 98105, or at giveto.seattlechildrens.org/give, or to a charity of your choice.

The family and friends of Kim Palmer de Rubertis mourn the passing of this exemplary and exceptional man. Kim was born in Kansas City, MO, on November 24, 1937. He was the first of three children born to William Joseph and Marjorie (Palmer)... View Obituary & Service Information

The family of Kim de Rubertis created this Life Tributes page to make it easy to share your memories.

The family and friends of Kim Palmer de Rubertis mourn the passing...