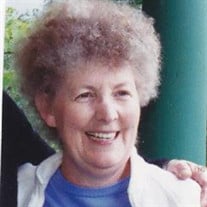 Kip Brown, formerly of Leavenworth and also the Tri Cities, died Nov.19th from Peritoneal Mesothelioma Cancer. She was born Sally Ann Tenley in Flint Michigan on July 27th 1938 to Thursa Marie (Lovejoy) and E.A.” Scotty” Tenley. She was the oldest of ten. At age thirteen, her Mom and Step-Dad moved to Albuquerque, NM. In 1954 she went to live with her Father and Step- Mother, Virginia, in Kennewick, WA. In 1956 Kip graduated from Kennewick High School and attended College in Pasadena, CA. Kip worked for newspapers in L.A. for years. In 1964 she returned to Kennewick and worked for the Tri City Herald newspaper for 20 years .On Dec 31 1973 she married the love of her life, Dick Brown, in Pasco, WA. In 1989 they moved to Kip's summer cabin, next to her father, on the Wenatchee River in Leavenworth. Kip was an avid outdoor person and liked to garden, feed the deer, fish, hike, and paint. She also loved to read, which was probably why she had such a large book collection .By 2008 her husband had passed away and she sold her house and moved to East Wenatchee. Kip was always busy in her yard. She had a passion for it. She hosted Christmas parties and in the winter and was known for blowing out snow from everyone's driveway if they needed it. She will be very much missed, her smile and quick come back remarks that could make you laugh! Kip is survived by her step-daughter, Becki Maltnken; two sisters, Polly Lange and Juanita Greigo; three half-brothers, Ronald and Rollin Robertson and Terry Tenley; two half-sisters, Cindy Vickery and Virginia McKinney; and also her cats, Katie and Rosie. She was preceded in death by her husband and her parents and one half-brother, Skeeter Tenley and a half-sister, Rollina Robertson.

The family of Kip A. Brown created this Life Tributes page to make it easy to share your memories.