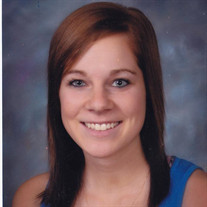 Kirsha Marie Dick, 26, passed away at Central Washington Hospital due to complications of Type I Diabetes, July 30, 2019, with family by her side. She is the daughter of the late Nicole Marie Dick. Her Grandparents, Michael and Donna Dick (also mom and dad), raised her since birth. She resided in the family home. Kirsha was born December 23, 1992, in Wenatchee, WA. She attended Cashmere School District, Wenatchee High School and Westside High School. After graduating, she attended Wenatchee Valley College studying nursing. Because of her size and personality, Kirsha was the star attraction in many weddings in her role as “Flower girl.” She was in more than five weddings by the young age of four. Kirsha always approached life and projects with a “head’s down charge ahead” attitude. Around the age of 12, out of the clear blue, Kirsha said “What is the running world record for the 100 meter dash? Let’s go to the Cashmere track and see if I can beat it!” She ran her little heart out. She loved sports including soccer and baseball (t-ball). She enjoyed playing catch and could sting your mitt when throwing her fastball. She was also a talented musician. She played the piano and attended numerous recitals. She also played the flute and was asked to play for the Cashmere City Band and rose to the occasion when asked to play a solo on the piccolo, something she had never played. She knocked it out of the park! She also took singing lessons. Kirsha had the gift of reading and jig saw puzzles. She had read over 500 books and could put together a 5000 piece puzzle, without looking at the picture, in less than three days. Kirsha had a true love for the outdoors. She loved skiing and snowboarding at Mission Ridge and Stevens Pass. She loved camping and hiking. Some of her favorites hikes were Lake Susan Jane, Janice Lake, Eight Mile, Fish Lake, and Pete Lake along with grand stories to tell of each. Kirsha loved horseback riding. Some of Kirsha’s fondest memories were her numerous trips to Disneyland, and the WA, OR beaches with her family. She was an avid patron of the Wenatchee Valley Humane Society. At 26 years of age she had owned 36 dogs and cats and loved them all. Kirsha’s favorite car was her precious Jeep Cherokee. She was a true friend to all she met. The kind of person that would give you the shirt off her back. She was always there when a friend was in need. Whether it was to talk, lend a shoulder to cry on or simply needed a ride. Even if was 3am in the morning, she was always there. Her favorite color was purple. She courageously battled her Type I Diabetes. God saw you getting tired and a cure was not to be so he put His arms around you and whispered “Come to me.” With tearful eyes we watched you as you slowly slipped away and though we loved you dearly we couldn’t make you stay. Your golden heart stopped beating your tired hands put to rest God broke our hearts to prove to us He only takes the best. By Frances and Kathleen Coelho Survivors include her grandparents, Michael and Donna Dick (dad and mom), brothers, Ryan of the home, Greg (Kate) of Woodinville, David (Pam) of Ellensburg and three nieces: Marin, Sydney and Matthew. One Uncle, Dick King (Jeannie) and numerous cousins. She was preceded in death by her mother, Nicole Marie Dick, Uncles: Randy King and Bob King. Kirsha’s life will be celebrated on Thursday, August 15th at noon at Jones & Jones – Betts Memorial Chapel. Interment will follow at Wenatchee City Cemetery. Friends and family may visit on Wednesday, August 14th from 4:00 to 6:00 pm.

Kirsha Marie Dick, 26, passed away at Central Washington Hospital due to complications of Type I Diabetes, July 30, 2019, with family by her side. She is the daughter of the late Nicole Marie Dick. Her Grandparents, Michael and Donna Dick (also... View Obituary & Service Information

The family of Kirsha M. Dick created this Life Tributes page to make it easy to share your memories.