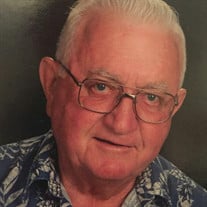 Larry Neal Ward Larry Neal Ward, age 86, passed away peacefully on Wednesday, October 30th, 2019. He was a much loved husband, father, grandfather, great grandfather, and friend to all. Larry was born June 8th, 1933 in Yakima, WA to Hiram and Oma Ward. He spent his school years at Oroville, WA and Magazine, AR and obtained his first formal job as a bus driver at age 16. He met his wife, Lori (Loretta) Grentz in Pullman, WA while attending college. He was called to service in the Korean War from 1952-1954, as a topographical land surveyor for the Army Core of Engineers. Larry and Lori were married March 30th, 1957 and moved to Chelan, WA, where they purchased a gas station and built their first home on the hill. There they raised their three children and Larry became very involved in the community. He was a volunteer fireman, a member of the Jaycees, and a successful Boy Scout leader, helping five young men to achieve the rank of Eagle Scouts. After selling the gas station he was employed with the Chelan County PUD until the purchase of his apple and pear orchard in 1970. Within a few years he began building his second home and in 1974 he moved his family to Monitor, WA to their new home so he could focus his full attention on farming. In 1978 Larry was instrumental in starting the Monitor Fire Department and building its first station. He was the Monitor fire chief for many years, (despite burning down his own smoke house three times). Larry was also a member of the Cashmere School Board, Cashmere Lions Club, Cashmere Kiwanis Club, American Legion, Perfect 10 Club, and Cashmere Jaycees, where he was voted Citizen of the Year in 1978. Larry enjoyed the outdoors, hunting, fishing, camping, downhill skiing, and spending time with family and friends. He was a much-loved member of the Cashmere community. Larry is survived by his daughters, Glenda Love and Sharon Cox (Rick) both of Cashmere, eight grandchildren, and fourteen great-grandchildren. He was preceded in death by his infant son Darrell, wife Lori, and son Greg.

The family of Larry Ward created this Life Tributes page to make it easy to share your memories.