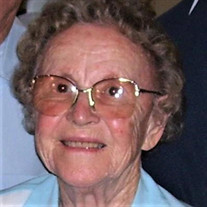 Laverna (Vernie) Mae Bechtol, 93, of Coulee City, WA passed to heaven on Monday, December 1, 2020, at Aegis Assisted Living and Memory Care Facility in Kent, WA. She was with her family. Laverna was born in Hay Springs, Nebraska on February 6, 1927 to Ralph and Freda (Wagner) Walton. She was raised in Clearfield, South Dakota. Her Mom wrote in Laverna’s childhood book that she was her Dad’s shadow, she liked to work and was very willing. Her Dad passed away when she was 10 years old so Laverna took on the role of taking care of younger brothers and sisters and doing chores on the family farm. She enjoyed playing ball with her brothers and sisters, as well as competing in track in school and rode the neighbor’s race horses. She had to move to attend High School and work in Valentine, Nebraska. After graduating from High School, Laverna moved to Grand Coulee Dam with an Uncle and Aunt and worked in administration during the building of the Grand Coulee Dam. Roy Bechtol, the love of her life, came into her world at this time, and they were married on February 11, l950, for 69 years until Roy’s death. Laverna and Roy had an exemplary marriage which was admired by so many. They had two children, Linda and Connie. Laverna loved her family and family was her life. Her family enjoyed many get-togethers including holidays (and always made Christmas so special), going to the ocean, meeting for picnics (which included homemade ice cream and of course lots of visiting). Laverna also enjoyed traveling back to South Dakota and various other places where she could visit with her Mom and brothers and sisters. Laverna was room mother for Connie and Linda’s classes while they attended school as well as Treasurer and headed funeral dinners for the Coulee City Presbyterian Church for many years. She worked on various elections and helped many people around Coulee City by fixing meals, getting their mail, doing housework/yardwork, taking them to appointments and anything she could see that needed to be done for others. Laverna was an excellent baker and cook and was well known for her pies, breads, and pastry. She was a perfectionist at sewing. She made her daughters’ school clothes, doll clothes, denim quilts from jeans for all family members, and even her daughter’s wedding dress and formal wear. Homemade canned peaches, pears and granola was something she enjoyed sending home with her family. Laverna was very sweet and an extremely hard worker. She did everything with accuracy and perfection. Laverna had a great faith and could often be seen helping at the church. Laverna leaves behind her two daughters, Linda Jensen (Benton City, WA) and Connie McClure (Renton, WA) as well as son-in-law Brad McClure (Renton, WA). Two Grandchildren, Laura (Kyle) Wilson (Scottsdale, AZ) and Ryan Jensen (Benton City, WA). Plus, many great grandchildren and nieces and nephews. Preceding her in death are husband Roy E Bechtol (Coulee City, WA); Grandchildren: Cory Jensen (Richland, WA), Shaun Jensen (Benton City, WA) and Kristopher Jensen (West Richland, WA); Parents Ralph Andrew Walton and Freda E. Walton and Guy Walton (Clearfield, SD); Sisters Joyce Bettcher (Santa Clara, CA), Elinor Blomstrom (Winner, SD), Kay Foster (Ashland, OR) and an infant sibling; Brothers Ralph Dean Walton, Richard (Dick) Walton (Clearfield, SD) and Albert Wayne Walton (Grand Island, NE). As Dad would say, “you are a good Mom”. Mom, we loved you so much and were truly a wonderful person. You will be greatly missed.

Laverna (Vernie) Mae Bechtol, 93, of Coulee City, WA passed to heaven on Monday, December 1, 2020, at Aegis Assisted Living and Memory Care Facility in Kent, WA. She was with her family. Laverna was born in Hay Springs, Nebraska on February... View Obituary & Service Information

The family of Laverna (Vernie) Mae Bechtol created this Life Tributes page to make it easy to share your memories.