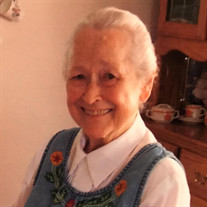 Lenore Katherine Hoover was born June 30, 1932 in Ontonagon, Michigan, to Clarence Josiah Hoover, Sr. and Donna Katherine (Corey) Hoover. She was the fourth of eight children. She was preceded in death by her parents and her oldest brother Clarence, Jr. and her brother Paul Allen (18 months old). She is survived by her brother Donald Hoover of Winton, Minnesota; sister Carol (Carl) Jorgensen of East Wenatchee, Washington; brothers Dan (Evie) Hoover of Colville, Washington; Roger (Mary) Hoover of Coolidge, Arizona; and Jerry Hoover of Lewiston, Idaho. She is also survived by a host of nieces and nephews and many close friends. In a high point of family history, in 1949, Lenore won the American Legion speaking contest to represent the whole Upper Peninsula of Michigan. The local Legion posts and town ladies scraped together $200, arranged for a bus, and bought her a whole new outfit, including a pink dress and nice 1.5-inch brown high heels. Someone loaned her a large suitcase, and another lady loaned her a new coat and others offered other articles of clothing. The contest was to be broadcast on the radio and first prize was $300. Her mother wrote in a letter, “I don’t suppose I’ll ever again dare to say, ‘Oh Lenore, can’t you quit talking just for a little while?” Well, everyone was excited and happy for her big moment, but when it was her turn to speak, her heel caught on the stair step and ripped off. Someone helpfully nailed her shoe together, and rearranged the order of speakers, but she felt off-kilter and rather than being able to give the speech she had won the regional contest with, the state contest was an on-the-spot subject she wasn’t prepared to speak about. So she returned to Ontanogan a more humble Lenore with a favorite family story to hear about for the rest of her years. As a young girl, she enjoyed being outdoors, loved animals, and helping her dad and brothers and neighbors with haying, raking, and driving the horses. As a young woman, she worked for the Hanford Nuclear Project as a postal delivery clerk. She entered the ministry in1955, in Michigan, but was unable to continue due to illness that required thyroid treatments. She worked as a bookkeeper for a school district and other clerical work. Lenore also helped raise two boys, Mark and Chuck Cook, the sons of her friend Mary Cook, in Idaho. She also spent a number of years enjoying the Rogue River Valley of Oregon and coastal Oregon with friends Karen Kjielgaard and Willa Warren, and beloved dogs and cats. During this period of her life, she served in the Coast Guard Auxiliary at Port Orford. In 2009, she moved to Wenatchee near her sister Carol who she called every night for long chats. Sometimes they reminisced about how their mother once punished them by making them sit together on the same bench and not fight. She and Carol talked often about being able to enjoy sitting on the same bench together in sweet fellowship during the last phase of their lives. In Wenatchee, Lenore adopted a small dog named Bruno. She loved living at Garden Terrace Apartments and became part of a supportive community of seniors. She also made many friends at the dialysis center where she spent a good part of three days per week for about seven years. As Lenore became increasingly weak and prone to hospital and rehabilitation visits, she lived briefly at Columbia View Terrace adult family home, two houses from Carl and Carol. Earlier this month, Lenore decided to stop kidney dialysis due to her increasing disability, after yet another hospital visit. She made this decision with grace and a deep faith in God. Lenore’s family would like to express deep appreciation for her many friends at Garden Terrace, and in the Wenatchee area, who made it possible for her to continue living in her apartment the last couple years and brought fellowship to her after she could no longer attend fellowship meetings. While there are too many to name, we especially thank Kay Stout and Jan Bishop. Lenore’s fourth-floor neighbor Noe Medrano increasingly and lovingly cared for her dog Bruno over the years during dialysis treatments, and hospital and rehabilitation visits. Noe brought her meals to her apartment when she could no longer go to the dining room, emptied her garbage, and walked her down to meet the LINK transit bus for transport to dialysis in the early mornings. Noe’s care for Bruno set Lenore free from worry about her pet in her last years and days. On Tuesday, a caregiver told her not to be scared, and that it was okay to let go. Lenore replied, “I’m not afraid. I want to go on.” She passed away on Thursday, March 12, at Regency Wenatchee nursing center after many years of struggling with various medical conditions. She felt deep comfort from her relationship with God as she faced the end of life. Lenore was looking forward to the future and chose to move forward into eternal rest and peace. Lenore’s family would like to express deep appreciation to her many friends at Garden Terrace Apartments, at Confluence Health, at the dialysis center, and at her Christian fellowship meetings. A telephone-only memorial service will be held on Thursday, March 19, at 1:00 p.m. You may listen to the service by calling 1-712-451-0484, access code 397839#. In lieu of flowers, please consider donating to gardenterrace.networkforgood.com.

Lenore Katherine Hoover was born June 30, 1932 in Ontonagon, Michigan, to Clarence Josiah Hoover, Sr. and Donna Katherine (Corey) Hoover. She was the fourth of eight children. She was preceded in death by her parents and her oldest brother Clarence,... View Obituary & Service Information

The family of Lenore Katherine Hoover created this Life Tributes page to make it easy to share your memories.