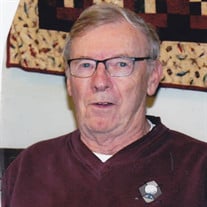 LeRoy Arthur Jones, husband, father, teacher, coach, fisherman, bowler, soft ball player, golfer and traveler, died Sunday, October 17, 2021, at Fieldstone Memory Care with his oldest daughter, Karen at his side. He was born September 19, 1937 in Elma Washington to Crawford and Frances Jones. He grew up in Pacific Beach, Washington and graduated from Molclips High School as class valedictorian. LeRoy attended Washington State University where he earned a degree in Geology and later teaching credentials. There he met Margie Martini and they were married on February 6, 1960. They moved to Wenatchee where both taught in the Wenatchee School District. LeRoy spent his entire career in Wenatchee teaching math and science at Orchard Junior High and Middle School. He coached-mostly basketball-during his career at both Orchard Junior High and Wenatchee High School. He served a term as President of the Wenatchee Education Association. After retirement, he worked at Columbia Lanes until the fire, and that ended that. LeRoy and Margie enjoyed traveling. They traveled around the United States, camping when their children were young and later on their own. They traveled with their children and grandchildren to Europe several times. He especially liked visiting Revo, Italy, where Margie had family. One of his last trips and his favorite spot was a few days in Iceland. He was a bowler who bowled a 300 game and is in two local bowling halls of fame. He played senior softball and was inducted into the Wenatchee Senior Softball Hall of Fame LeRoy and Margie had four children, Karen, Steve, Christopher and Barbara of whom he was so proud. He had three grandsons and two great grandchildren. At the untimely death of his son Steve, he joined Margie in the Catholic Church and was active, especially with the St Vincent de Paul food bank. He was preceded in death by his parents, his son Steve and son-in-law Basil Smith. He leaves behind his wife of 61 years Margie, his daughters Karen Smith, of King City California; Barbara (Pete) Smith of Helena, Montana; and son Christopher of Seattle. He is also survived by three grandsons, Gregory Klahn of Spokane, Chase Smith and Daniel Smith in Montana and two great grandchildren, Kayden Klahn and Shyrah McDonald of King City, California. He also leaves his brother John of Arizona, 4 sisters-in-law, a multitude of nieces and nephews, friends, and most especially the hundreds of students he taught and coached. Funeral mass will be celebrated on Wednesday, October 27 at 11:00 am at St. Joseph’s Catholic Church in Wenatchee. Interment will be at Wenatchee City Cemetery. In lieu of flowers donations may be made to Confluence Health Hospice of Wenatchee or the St Vincent de Paul Society at St. Joseph's Catholic Church in Wenatchee.

The family of LeRoy A. Jones created this Life Tributes page to make it easy to share your memories.