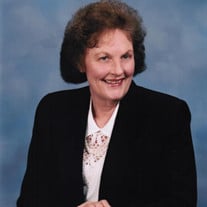 Linda Ruth (Patton) King, 80, of East Wenatchee Washington passed away in her home in the arms of her daughter, surrounded by her children April 25th, 2020. She had courageously battled multiple myeloma for nearly five years. She was born June 20, 1939 in Tucson, Arizona of goodly parents Howard E. Patton and Madeleine L. (Barrett) Patton who made their home in Yuma, Arizona where her father worked as a switchman for the Southern Pacific Railroad. Linda was their only child. Hers was a happy childhood. Linda grew up in Yuma and was close to her cousin Barbara (Barrett) Putnam whom she revered as a sister. In Linda’s young life she loved to ride her bicycle, she joined Camp Fire Girls and went to camp, and she was an active member of the First Baptist church where she both sang in the choir and played in the harmonica chorus. It was at church she first met “Jr. King” or John F. King at age 15. They dated all through school at Yuma Union High (go Crims!) and she graduated in 1957. Despite her being a “Criminal” (the unique name of the mascot from school), Linda was often thought of as a Saint. She attended the University of Arizona and was a home economics major. She also was a member of the Gamma Phi sorority where she met many of her lifelong friends. In 1960, John F. King proposed to her on the rim of the Grand Canyon at sunset. The family joke is that she’d better say yes. She did and they were married in Bedford, Indiana August 27th, 1960. They made their first home in Yuma and their first Son, John “Jay” H. King was born in Tucson the next year and a daughter, Marlena Deann, born in Yuma in 1964. Her husband, John, got work in Washington State for the Washington State Department of Transportation as an engineer and they moved to Wenatchee, WA in 1965. In 1966 their last child, Darren S. King was born there. Raising children for Linda was the “highlight of my life” she’s said. She used her education and the good influence of her dear parents, to make a beautiful home and was an excellent cook. A member of the American Sewing guild, she was a seamstress at home and made many garments over the years. She laughed that sometimes she just had to go to the “Tavern” which is what she called any fabric store; a new project always on the horizon. She was the Kool-Aid mother on the block full of children. Her door was always open as many came to climb the large cottonwood tree in the yard of the house on the corner. She was a master canner and put up many fruits and vegetables for her family. Her garden was bounteous. Her children and her home clean. She could whistle!! ……plug your ears whistle…. Which called the children home from whatever place they were playing/hiding on “the block”. She was a bleacher mom. She rarely missed a game or a concert or an event of her children’s. She loved to watch her son Jay’s baseball and football games, Marlena’s Circus performances, and Darren’s band concerts. Linda was a Camp Fire Girl leader for over 10 years. She served on the North Central Council of Camp Fire Girls which teaches girls skills in science, health, outdoor living, citizenship, business and crafts. She loved her “group” and led them from Blue Bird status through Graduation. Camping skills and arts and crafts were fun for the girls and there were many field trips she took them on. She remained active in Camp Fire after her group of girls grew up and away, continuing to serve in her community. Linda went to work in 1979 for The Chelan- Douglas Child Service Association and was a member of the National Head Start Association. She held many titles in her 30 years of service with the people she loved there, longest was Nutrition Coordinator but she most liked what the staff and children called her….”Cooker”. Her love for her family drew her in her later years into genealogy and the search for all the answers and treasures of the past. In 2015, she and her daughter took a month long trip by car driving the route followed by their family ancestors stopping at homesteads, cemeteries and court houses. She used computers and corresponded relentlessly to organize her family tree. She told the stories and gathered pictures. One of her favorite sayings was, “Everyone we have loved and lost becomes our future.” Linda was preceded in death by her husband: John F. King, Jr., father: Howard Edward Patton, mother: Madeleine L. (Barrett) Patton. She leaves three children on earth, John “Jay” H. King (Kathy Kimball), East Wenatchee, WA, Marlena D. (King) Morningstar, East Wenatchee, WA and Darren S. King (Ellie), Des Moines, WA. Grand children: Cheyenne J. King, Jon Herrera (step), Matthew F. Herrera, Ammon S. Herrera, Lehi J. Herrera, Evan J. King and Faith King. In lieu of flowers please consider donating to the Wenatchee Valley Humane Society, 1474 S. Wenatchee, WA, 98802 Jones & Jones- Betts is in charge of arrangements. Viewing in lieu of funeral Friday May 8th, 3pm to 7pm at Jones and Jones Betts in Wenatchee. 10 people per room maximum with rotation available. Please visit their website to view Linda’s digital obituary and watch her memorial video www.jonesjonesbettes.com A forthcoming celebration of life at Linda’s home will be announced via Facebook when conditions allow.

Linda Ruth (Patton) King, 80, of East Wenatchee Washington passed away in her home in the arms of her daughter, surrounded by her children April 25th, 2020. She had courageously battled multiple myeloma for nearly five years. She was born June... View Obituary & Service Information

The family of Linda Ruth (Patton) King created this Life Tributes page to make it easy to share your memories.