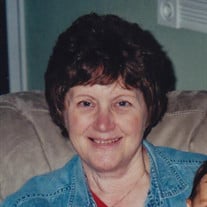 Linda Grace Mineard (Bailey), 74, passed away Sunday, March 7, 2021, with her family by her side. She was born to Haskell & Peggy Bailey on February 22, 1947, in Portland, OR. In second grade, her family moved to Adna, WA, where she stayed until graduating as Valedictorian of her class in 1965. She then attended Peterson Business College in Seattle, WA. Linda moved to Olympia and started her family which grew to three daughters. She married her soulmate in 1983 and the family moved to Eastern Washington. Linda is survived by her husband of 38 years, Gerald of Wenatchee, WA; Sister Teri Haynes of Lacey, WA; Brother Larry Bailey (Elaine) of Napavine, WA; Sister-in-law Karen (Tom) Garrison of Yakima, WA; Children Christina Shannon (Michael) of Wenatchee, WA; Charlyn Bradford of Kenmore, WA; Catherine Cokos (John) of Lynnwood, WA; Rebecca Hoover (Aaron) of Yakima, WA; Tim Mineard of Yakima, WA; Grandchildren Zachary and Alexandra Cokos and Aadon Hoover; Niece Shelley Tepponen (Robert) and Nephews, Rodney Haynes, Jason Bailey, and Jeramy Bailey, along with her lifelong friends Jane and Judy and several dear friends, including LeeAnn, Pauline and Ruth. She is preceded in death by her parents, Haskell and Grace “Peggy” Bailey and her sister, Sheri Bailey. She was a loving wife, an incredible mother, grandmother, auntie, sister, and friend. Linda displayed her devotion to her family through her love of hosting gatherings for all of us. Whether it was a holiday or a casual weekend at the cabin, she was a perfect hostess who cherished taking care of anyone who joined the party. She will always be remembered for her kindness, sense of humor, generous spirit, love of Elvis, and fondness for desserts. She twice traveled the United States with Gerald in which she insisted on visiting every state capitol. She meticulously documented these trips and created beautiful photo albums, in addition to many family photo albums that we will always cherish. She was genuinely selfless and displayed that every day in how she lived her life. She loved and was loved by everyone she met. As her son-in-law stated, “She never said an unkind word.” A special, heartfelt thanks to the amazing nurses, aides, and staff at Highgate Senior Living for providing loving care to our mother. Jean, Brooke, and Sarah, you are indeed a blessing, and we appreciate everything you have done for our family. A Graveside Service celebrating her life will be Thursday, March 18, 2021, at 11:00 a.m. at Claquato/Sunset Memorial Gardens Cemetery in 142 Stearns Rd, Chehalis, WA 98532, with high school friend Tom Cole officiating. In lieu of flowers, donations in Linda’s name can be made to the Parkinson’s Foundation www.parkinson.org Arrangements are by Jones & Jones-Betts Funeral Home in Wenatchee, WA.

Linda Grace Mineard (Bailey), 74, passed away Sunday, March 7, 2021, with her family by her side. She was born to Haskell & Peggy Bailey on February 22, 1947, in Portland, OR. In second grade, her family moved to Adna, WA, where she stayed until... View Obituary & Service Information

The family of Linda Grace Mineard (Bailey) created this Life Tributes page to make it easy to share your memories.