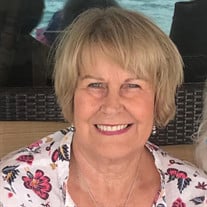 Louise Christina (Kuntz) Mertes of East Wenatchee was born to Ray and Lenore (Gothke) Kuntz on August 22, 1941 in Wenatchee, Washington. Louise passed away on June 23, 2021, two months shy of her eightieth birthday due to complications arising from lung cancer. Because the sudden condition occured during Covid-19 Pandemic restrictions, she was able to return home from Harborview Hospital in Seattle to spend two full days visiting with family and friends. Louise graduated from Wenatchee High School in 1959 and competed for the Ski Team and also played first chair clarinet. She was a member of the Appleatchee royalty while in high school. During this time she met Gary Mertes and never looked back. She attended Seattle U. while Gary was a student at the University of Washington. They were married at St. Joseph's Church on February 18, 1961. They initially made their home in Seattle while Gary worked for Touche-Ross Accounting as a CPA. While living in Seattle, they both became PNSIA ski instructors at Snoqualmie Pass and at Mission Ridge. Both daughters, Tracy Christine and Teri Marie, were born in Seattle. In 1969, they moved to Wenatchee so Gary could takeover his father's business renaming it G.E. Mertes Accounting. In the beginning, Louise worked as office manager for the firm. Later, she became an interviewer for the Washington State Employment Security Dept. Louise taught fellow employees how to play bridge with several of them becoming avid players. She was a member of card groups including at Wenatchee Golf Club. Louise also played golf in the 18-Hole Group at WG&CC for almost 40 years. Louise had many hobbies that she excelled at including sewing, pottery, and quilting. She was a member of the New Kids on the Block Quilting Group for many years. She attended quilt shows throughout the US, exhibited often at the Wenatchee show, and received numerous awards. Louise and Gary traveled extensively including to Hawaii, Germany, Alaska, the Caribbean, and other destinations often visiting daughters and grandkids. Her favorite place, though, was on the shores of Lake Chelan in the family's summer house. Survivors include siblings Norm (Linda ) Kuntz (Wenatchee), John (Sherry) Kuntz (Chelan), Anita (Kuntz) and Gary McDonald (Arizona); daughters Tracy Mertes (Bend, OR) and Teri Jackson (Chelan); grandchildren Tim Durschi (Jackson, WY), Erica Durtschi (Bend, OR), and Travis (Abby) Durtschi (Sisters, OR), Casey Jackson (Manson) and Kyle Jackson (Bozeman, MT); great-grandchildren Isla and Millie Durtschi. In-laws Bruce Mertes (Wenatchee) and Jeff & Kathy Mertes (Wenatchee) as well as nephews and nieces. She was preceded in death by husband Gary, who were married for nearly 59 years; and parents Ray & Lenore Kuntz. Special survivors are Starfish Girls Class of '59 - 79 FOREVER! A celebration of Louise's life with family and close friends will be be held at a later date.

Louise Christina (Kuntz) Mertes of East Wenatchee was born to Ray and Lenore (Gothke) Kuntz on August 22, 1941 in Wenatchee, Washington. Louise passed away on June 23, 2021, two months shy of her eightieth birthday due to complications arising... View Obituary & Service Information

The family of Louise C. Mertes created this Life Tributes page to make it easy to share your memories.

Louise Christina (Kuntz) Mertes of East Wenatchee was born to...