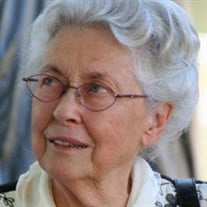 Lucille Miller Winther (Cindy to many of her friends) died on August 29, 2019, at her home in Wenatchee, WA, surrounded by her family. She was born on September 19, 1925, in Harris, AR, to Oscar and Oma Wilkins. Lucille went to school in Arkansas until her 16th year, when her family came to Washington State to look for work in the apple orchards. They settled in Chelan, WA, where she graduated from high school. After school, she was accepted into the Army Nurse Corps and went to nursing school at Whitworth College in Spokane, WA. Lucille loved nursing, but she loved Dan Miller from Chelan more. When he returned from the Army at the end of World War II, and asked her to marry him a semester before she could finish, she did so. Lucille and Dan settled first in Chelan on his family’s orchard at First Creek. There, they had two daughters: Susan Diane in 1947, and Rebecca Ruth (Becky) in 1949. Dan had been halfway through college when he went into the army, so they moved back to Western Washington for him to finish his education at the University of Washington. By the time Dan graduated with a degree in architecture, they had three daughters, (Carol Ann came along in 1952). They found lasting friendships and architectural opportunities in Edmonds, WA, where they made their home and where they added three more children to their family: Michael Dan in 1957, Heidi Lou in 1958, and James Allen in 1960. Edmonds was a wonderful home for them. Tragedy struck in 1963, when Dan was killed in a hunting accident. Lucille drew on the strength of her faith, family, and friends to continue raising her children alone. She missed Dan for the rest of her life. In 1967, she married Melvin Winther, and for a time, they continued to live in her home in Edmonds. In 1971, she and her three children, who were still at home, moved back to Chelan. She made a living for her family from orchards that she owned and managed. Lucille moved her family to a home on Lake Chelan, and for many years she provided a home base there for her growing family. Her children and grandchildren loved visiting her there and playing in the lake. Eventually, she left the lake, moving to a condo in Wenatchee, where she lived the last 12 years of her life. Lucille was a legendary cook, spreading a table for family and many, many guests. She loved going crabbing, oyster picking, and clam digging, often coming home with enough to make wonderful crab Louies and clam feeds. She was a fearless Geoduck digger and even brought home octopi she hauled in. Her artistry was in her cooking, in the gardens of flowers and vegetables she cultivated, and in the love she had for her family and friends. She was a voracious reader, especially as her health deteriorated and she was unable to continue with other pursuits. From her children’s earliest memories, she passed on a love of reading, appreciation of good humor, and the importance of character and kindness. She was a member of a fellowship of Christians who met in their homes and enjoyed friendship and fellowship throughout the world. Her faith, support, and participation in the fellowship was a constant and very important aspect of her life. Her wise council and testimony meant a great deal to her family and friends. “Grandma Lucy” was beloved by her grandchildren and great-grandchildren. She never lost her eager interest in those around her, and she kept up with not only her own family, but with the families of her friends and with children she had supported around the world. Proof of that caring relationship was when a young man she had supported in Taiwan brought his wife to meet her on their honeymoon. She was an ardent U of W football fan and also passionate in her politics, supporting those she felt would be of most help to the less fortunate members of our society. Lucille is mourned and survived by her family: daughters: Susan (Craig) Adams of Ashburn, VA, Rebecca (Paul) Abenroth of Anacortes, WA, Carol (Doug) Evenson of Ellensburg, WA; son-in-law, Mark Kollmeyer of Chelan, WA; and sons: Michael (Alice) Miller of Chelan, WA, and James (Beata) Miller of Ellensburg, WA. She is also survived by her stepchildren: Carol Hotchkiss of Orting, WA, Lyle (Bonita) Winther of Palm Bay, FL, and Lloyd (Nancy) Winther of Mesa, AZ. She was preceded in death by her husbands: Dan Miller and Melvin Winther; by her parents, Oma and Oscar (Jim) Wilkins; brothers: William, John, and Oscar, Jr.; by her youngest daughter, Heidi; and by her great-grandchildren: Kennedy and Kasper Kollmeyer. Her descendants are many: grandchildren: Dan Clark, Aaron Clark, Tristan LiaBraaten, Britt Urquiza, Annalise Callo, Jennifer Kiel, Jeff Evenson, Nick Evenson, Adam Miller, Ryan Miller, Kit Kollmeyer, Ben Kollmeyer, Tim Miller; and step-grandchildren: Marlys Black, Greg Hotchkiss, Jilene Winther, Brian Winther, Jilene Winther, Kimberly Winter, and Scott Winther. Her great-grandchildren are: Caitlin Clark, Emma and Ava Clark, Annika LiaBraaten, Lucia, Micaela and Nicolas Urquiza, Josephine and Camden Callo, Eliza Kiel, Colton and Kendall Evenson, Lexie Calavan, Jacen Miller, Bram and Finley Kollmeyer, Louie Kollmeyer; and step-great-grandchildren: Ian and Tana Winther, Shauna, Zachary, Brianna and Drew Winther, Katie Winter, Emily Pointer, Dylan Black, Haley Hotchkiss, and Cameron Hotchkiss. Lucille will also be greatly missed by her many surviving friends. A Memorial Service will be held on Saturday, September 28, 2019, at 1:00 p.m., at Goosetail Orchard, 311 Stayman Road, Chelan, WA. All are welcome.

Lucille Miller Winther (Cindy to many of her friends) died on August 29, 2019, at her home in Wenatchee, WA, surrounded by her family. She was born on September 19, 1925, in Harris, AR, to Oscar and Oma Wilkins. Lucille went to school in Arkansas... View Obituary & Service Information

The family of Lucille Winther created this Life Tributes page to make it easy to share your memories.

Lucille Miller Winther (Cindy to many of her friends) died on...