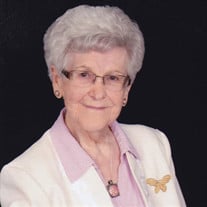 Lucy F. Bruehl, 94, passed away peacefully on December 7, 2019 at Central Washington Hospital surrounded by her loving family. Lucy was born on October 22, 1925 at the family home in Sterling, Oklahoma. She was the 5th child out of 8 born to devout Catholics, Herman and Ida (Schulte) Stottman. Lucy grew up on the family farm in Anadarko, Oklahoma. At the young age of 13, Lucy, her younger sister Lydia, and their mother developed typhoid fever. Lucy lost her mother to this illness and she lost her hearing. She attended Saint Patricks Indian Mission school in Anadarko where she graduated. After graduation she moved to Oklahoma City. It was there that her sister Lydia introduced her to the brother of her boyfriend. On July 24, 1945, Lucy married the love of her life, Bernard “Barney” Bruehl, in , Oklahoma. They settled in and began a family. Their first son Larry was born in March 1946. Lucy and Barney decided they had enough with the climate and tornadoes, so they decided to start out in Denver, Colorado. They lived there for a short time and decided it wasn’t the place for them. They moved on to Arkansas for a year and half, soon to realize they hadn’t escaped the tornadoes. It was in Arkansas that a neighbor of theirs had an uncle who lived in Peshastin that owned a pear orchard. They decided to come take a look at the Wenatchee Valley. They fell in love with all the orchards, the mountains and the river. In 1952, they went back to Arkansas, packed up and headed west. They first settled in Peshastin, where son Ronald “Red” was born in July 1953. In 1960, Barney and Lucy were able to purchase their home on Old Monitor Rd in Cashmere. They also had a little place to park their trailer up at Fish Lake and could always be found there fishing for perch and having a good time with friends and family. In 1985, they were able to take their first and only vacation to Hawaii. Sadly, Barney passed away in November 1988, leaving Lucy a widow at the young age of 63. She sold the family home and moved into her apartment in July of 1989 where she resided until her passing. After Barney’s death, Lucy went on a trip to New Zealand with Rose Walsh and Inez Scribner. She also tried to get back to Oklahoma every two years to visit family. Once traveling became too much, both her sons drove Lucy back on two separate occasions to see relatives. Her sister Lydia was able to make one last trip west to Cashmere this October. Lucy learned to pack apples and pears when they settled in the valley. She wrapped many of them for 32 years, having worked 16 years at the Dryden Independent warehouse and the other 16 at Cashmere Fruit Exchange. In 1990, Lucy’s volunteer work began because she wanted to keep herself busy. One of her most rewarding activities was time spent at the Cashmere Convalescent Center. She once said, “Old people are special, they need very little, but they need that very little so much. Sometimes it’s just a smile and a kind deed. The rewards are great: just to look at the smile and gleam in their eyes.” Lucy’s volunteering didn’t stop there, she was a member of the American Legion Auxiliary. She could be found on Saturday’s helping out on bingo nights. The Legion also had sewing meetings and the ladies would crochet blocks to make afghans for the disabled veterans. Lucy was still crocheting blocks, up until 2 weeks before her passing. Lucy also volunteered as a hostess at the Cashmere Museum for many years. Lucy was a devout Catholic, she attended St. Francis Xavier Church, now Our Lady of Assumption in Cashmere for 67 years. Shortly after Barney’s death, she became a Eucharistic Minister. This allowed Lucy to take communion every week to those who were unable to attend church services. Family was everything to Lucy. She enjoyed watching her grand kids grow up. She attended many sporting events and other school activities. She loved having them spend the night, playing Rummikub, among other shenanigans. Besides her grandchildren, she was proud to be G.G. to her many great-grand kids. Lucy was able to be daycare on Tuesdays for her two oldest great-grandchildren, and attended high school graduation of the oldest this year. The last few years, Lucy slowed down and took life in stride. She enjoyed the simple things: Thursday lunches with the ladies from church, tuna melts from Weeds Cafe, family gatherings where she could sit back and watch her grandchildren and great- grandchildren, the occasional fresh liver from Derek, Colby or Red’s hunting excursions, Sunday breakfast after church with Larry. Lucy was preceded in death by her parents, her husband Barney, her sisters- Mary, Anna, and Agnes, and her brothers- Bernard and Joseph. She will be sorely missed by her sons Larry Bruehl and Red (Judy) Bruehl, her grandchildren John (Trang) Bruehl, Jancee (John) Regan, Derek (Tiffany) Bruehl and Colby (Meghan) Bruehl, her great-grandchildren Camron and Cole Regan, Jaeger and Coy Fletcher, Bryar Bruehl, Jacelyn Bruehl and Josie Bruehl, ex-daughter-in-law Nancy Bruehl, sister Lydia Bruehl, brother Herman Stottman, numerous nieces and nephews, and a very good friend Ginger Samuel. Services will be Monday, December 16th at Our Lady of Assumption 301 S. Division St, Cashmere, Wa. Viewing and rosary at 10:00, Mass at 11:00 followed by a lunch reception at the American Legion Hall 401 Sunset Hwy, Cashmere, Wa. Any donations can be made to Our Lady of Assumption Building Fund. You will be missed by so many, until we meet again…….

Lucy F. Bruehl, 94, passed away peacefully on December 7, 2019 at Central Washington Hospital surrounded by her loving family. Lucy was born on October 22, 1925 at the family home in Sterling, Oklahoma. She was the 5th child out of 8 born to... View Obituary & Service Information

The family of Lucy Bruehl created this Life Tributes page to make it easy to share your memories.