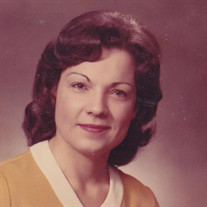 M. Eugenia (Genie) Miller, age 93, of Wenatchee, passed away peacefully on Wednesday, February 23rd, 2022. Genie was born New York, New York on February 6th, 1929 to Ralph Rivera and Mary Grissetti. She attended Holy Rosary Convent and Julie Richman all girls high school in New York. She graduated from New Dorp High School on Staten Island and then worked for Metropolitan Life Insurance Company and the Civil Air Patrol in New York. Genie married Nicholas Roy Vespier in Jersey City, New Jersey before moving to Richland, WA. It was there that their children Michele Eugenia Vespier and Roy Thomas Vespier were born. While in the Tri-Cities, she graduated from Columbia Basin College with her Associated Degree. She then attended Central Washington University and graduated in 1965 with her Bachelors Degree in Education and Sociology. She taught school at Marcus Whitman in Richland, WA before attending the University of Nice, France. In 1968, she married Roy L. Miller in Wenatchee, WA where they began their life together. She then began her 25-year teaching career in the Wenatchee School District where she taught at Columbia and Washington Elementary School. Genie had a lifelong interest in travel and languages. Genie and Roy, along with many close friends and family, enjoyed numerous trips to France, Italy, Spain and many other European Countries. Genie was an accomplished watercolor painter. She enjoyed opera, reading, playing bridge, walking, Tai Chi, and knitting. Her grandkids have fond memories of her language tapes and opera music consistently playing in the background of her home. Genie was proud of her Italian heritage and often shared it with her family. Genie was a member of Saint Joseph Catholic Church of Wenatchee and the Catholic Daughters. She was also a member of the Washington State Retired Teacher Association and The Son’s of Italy. During their retirement years, Roy and Genie spent many years wintering in Palm Springs, CA where they made several close friends that she treasured dearly. Genie spent 15 years as a member of the Artist’s Council and Service Council at Palm Springs Art Museum where she and Roy also ushered many theater events. Genie had many wonderful travel experiences and enjoyed many hobbies, however, her main treasures in her life were her family. In addition to her children, Genie was blessed with four grandchildren: Sophia Leyden Ohlemann and Soren Leyden of Palm Springs, CA and Nicole Vespier Paule(Buck) and Aimee Vespier McGraw (Jacob) of Wenatchee, WA. She also had five great grandchildren: Nicholas K. Ohlemann, Brynn and Reece Paule, and Sawyer and Sterling McGraw that brought her great joy during her last years. She is survived by her loving husband of 53 years, Roy; and her loving children Roy Vespier (Lilith) of Wenatchee, WA and Michele Vespier of Cathedral City, CA; her devoted sister, Mabel Greene of Wenatchee, WA; her four grandchildren and five great grandchildren; and numerous extended family as well as friends that became like family. Genie was proceeded in death by her parents, and grandson Thomas Vespier. A Funeral Mass will be held Friday, March 25th at 11:00am at St. Joseph Catholic Church, 625 S. Elliott, Wenatchee, followed by a luncheon at Kuykendall Hall. Entombment will be help at 2:00pm at Evergreen Memorial Mausoleum, 1301 10th St. NE, East Wenatchee. Arrangements are being held at Jones and Jones ~ Betts Funeral Home in Wenatchee.

The family of M. Eugenia Miller "Genie" created this Life Tributes page to make it easy to share your memories.