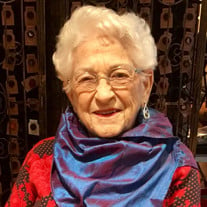 Madelon D Hysaw “Memom” Madelon Dietze Hysaw passed away on August 15, 2019. She was 97 years old and had a long, fabulous life. She was born February 20,1922 in Karnes City Texas to H Leroy and Lora Dietze. In 1942, she met the love of her life, Howard C Hysaw, and they married on May 26 of that year after a whirlwind, 5 week romance. Their marriage and their romance was as lengthy as their courtship was short, lasting until his death in 1990. After Howard’s service in the Air Force, they settled in Kenedy, TX for 42 years. She was employed at the United Methodist Church as church secretary for 30 years, and was active in the Eastern Star and the Daughters of the American Revolution. They were blessed with a daughter, Kathy Hysaw Weafer, who survives them. After the death of her husband, she moved to Hawkins, Texas and lived blissfully on Lake Hawkins from 1990-2000. Her next door neighbor was her sister Doris Williams, and they made many memories together with travels, church parties and cocktails on the deck. From 2000-2010 she lived in Austin, TX, and settled into life as a great-grandmother. She travelled often and welcomed 5 great-grandchildren. Until her death, her joy was participating in every step of their lives, and in the lives of her daughter and grand-daughter, Kathy and Melanie. She adored them and they adored her in turn. In May of 2010, she moved with Melanie and her family to Wenatchee, Washington. There, her life was one of school plays, gymnastic meets, lacrosse, and football. She was always excited to hear the kids’ daily stories and attend their events, even in the cold. She and her best friend, Carol Eldred of Wenatchee made the trek to many sporting events with bling, signs and enthusiasm. Last year, her youngest grand-daughter, Kelly Weafer, became engaged to Grant Heatley. It brought her great happiness to witness their special commitment ceremony in Wenatchee, since she knew she would be unable to travel to their wedding in 2020. By this time, her body’s abilities were no longer keeping up with her spirit and determination. Madelon was a true lady in every sense. She could enter a room and people were automatically drawn to her. She was regal in appearance and loving in nature. She never met a stranger and her door was always open. She had an infectious laugh and sparkles in her eyes. She loved her evening glass of wine while sitting on the back porch watching the grand kids swim and play. She made many friends and touched many people along her way, as she loved so effortlessly. God was her foundation, and “family first” was her mantra. Luckily for you, if you knew her, she considered you family. She is survived by her daughter, Kathryn Hysaw Weafer of Austin, TX, her sister Doris Williams, niece Linda Crabtree and Lee Williams of Hawkins, TX, and by her granddaughter Melanie Adcock Tucker and Dr. Thomas Tucker of Wenatchee along with their 5 children John (“JAX”), Blaise, Madelon, Elizabeth and Henry and by her grand daughter Kelly Weafer of Austin, Texas. The family would like to thank the staff at Avamere for excellent care, love and friendship. Madelon’s life will be celebrated on Saturday, August 24 at 10:30 A.M. at Jones & Jones – Betts Memorial Chapel. Another celebration of life service will take place on Thursday, August 29th at 1 P.M. at Eckols Funeral Home, 420 W Live Oak St, Kenedy, TX 78119. In leu of flowers please make a donation to your local Salvation Army or Humane Society.

The family of Madelon D. Hysaw “Memom” created this Life Tributes page to make it easy to share your memories.


Madelon Dietze Hysaw passed away on...