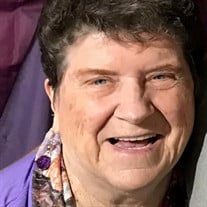 Marcella F. Crossley, 87, passed away peacefully on Sunday June 6, 2021, at home with family by her side. Marcella was born October 13, 1933 in Kalispell, MT to Thomas and Alice Thibert. Marcella was the third of six children born to this union, where they were raised working the family farm. Marcella attended St. Matthew’s grade school and Flathead (County) High School before graduating in 1952. In 1962, Marcella met the love of her life Wes Crossley and they were happily married for 55 years until Wes passed in 2017. In 1966 they purchased the Parkway Motel, in Chelan, WA where Marcella, who was no stranger to hard work, handled the day-to-day operations of the business from checking in guests to cleaning rooms, to providing lodging and transportation to the boat for guests of Holden Village. Throughout those years she also provided guidance to the many nieces and nephews who spent the summers learning the value of hard work. Retiring in 1997 as they sold the Parkway Motel, Marcella was actively involved with the Chelan and Wenatchee Senior Centers and continued a life of caregiving for many people in the community. In 2005 they moved to Wenatchee, WA to make life a bit easier for Wes to get his dialysis treatments. Marcella is preceded in death by her loving husband of 55 years, Wes, her sons Brian Crossley and Kevin Crossley, and grandson Drew Crossley. Marcella is survived by her sister Agnes Dors of Great Falls, MT, daughter-in-law Kim Crossley of Henderson, NV, grandson Jason Crossley (Angie) of East Wenatchee, WA, granddaughter Sara Weeks (Richard) of London, England, great-grandchildren Kaitlynn and Dylan Crossley of East Wenatchee, and Archer Weeks of London, England. She is also survived by numerous nieces and nephews. Per Marcella’s wishes she will be buried in Chelan with her husband and sons, wanting no service. Her wish is for all to simply be happy as she will finally be with her family once more. If you would like to donate in her name we suggest that you do so to Holden Village or the Chelan or Wenatchee Senior Centers that where all very near and dear to her heart and where she spent many hours of service.

Marcella F. Crossley, 87, passed away peacefully on Sunday June 6, 2021, at home with family by her side. Marcella was born October 13, 1933 in Kalispell, MT to Thomas and Alice Thibert. Marcella was the third of six children born to this... View Obituary & Service Information

The family of Marcella F. Crossley created this Life Tributes page to make it easy to share your memories.