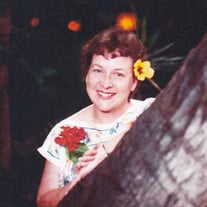 Marilyn Compton King was a fourth generation member of pioneer Cooper/Burgess family that homesteaded at Pateros, WA in 1897. Doctor McKinley delivered Marilyn at home April 4, 1935 in Pateros, WA. She died February 5, 2021 at the age of 85 after a six week battle with Covid 19. When she was 6 years old her family moved to Wenatchee where she graduated from High School. Through Jr. High and High School she worked at “The Porch.” She was a majorette, member of the Pep Club, Debate Team and the Swimming Team. She babysat, packed cherries, worked as a nursing home aide, and at Johnson's Inc. She married William H. King in 1953 and they made their home at Monitor, WA for 25 years. She was active in PTA, room mother, Blue Bird Leader, and a 4-H Leader. She loved ice and roller skating, swimming, boating, slalom water skiing, snow skiing, snowmobiling, dancing, and gardening. She was a member of the Monitor Methodist Church. She was employed by Bardin’s, Fruit Growers Service, Monitor Market, Blue Star Growers, and was a Company Representative for many grocery line products for over 20 years. She also was Area Manager and Sales Representative for four North Central Washington counties for the first official WA State Travel Directories that were sent all over the world and available in all Chambers of Commerce in WA State. Marilyn was also a Real Estate Agent for Barnett Realtors, worked for Directed Media and Webpco Printing, producing special edition materials for Centennial Year, and also an Account Representative for TCI Cable. She was devoted to her grandson, John who dubbed her “Cookie Grandma”, “Good Jam Gram” and “Silly Grammar” They laughed a lot and learned from each other. She loved her daughter, Kathy, and son, Greg, who both excelled at sports and went to state. She was proud of how they met life's challenges and their accomplishments. She loved flowers, nature, sharing with friends, and laughter. She was preceded in death by her daughter, Sherry Sue King; son, Gregory Wayne King; father, Eugene Jackson “Haymaker” Compton; mother, Frances Cooper Compton Harris; stepfather, Hy Harris; brother, Jerry Compton; and sister, Pat Herzog. Survivors include her daughter, Kathy King Guimond; son-in-law, Joe Guimond; grandson, John William Griffith; and brother, Bill Compton. Love and gratitude to Hospice, Fieldstone Memory Care, Dr. Jurges and all of Marilyn’s caregivers for the past five and a half years. A graveside memorial will be held April 5, 2021 at 1:00 pm at Wenatchee City Cemetery.

Marilyn Compton King was a fourth generation member of pioneer Cooper/Burgess family that homesteaded at Pateros, WA in 1897. Doctor McKinley delivered Marilyn at home April 4, 1935 in Pateros, WA. She died February 5, 2021 at the age of 85... View Obituary & Service Information

The family of Marilyn Compton King created this Life Tributes page to make it easy to share your memories.

Marilyn Compton King was a fourth generation member of pioneer...