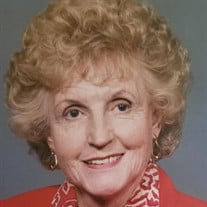 Marjorie L. Stevenson, 94 years old, of Wenatchee, WA passed away on May 28th, 2020 after a 3 week illness. She was born on November 24th, 1925 to Jim and Edith Chadderton of Stemilt Hill in Wenatchee, WA. Marjorie graduated from Wenatchee High School in 1942 at the age of 16 and also was the Stemlit Hill Apple Blossom Princess that year. She moved to Beaumont, California and became a secretary to a Red Cross Social Worker on a U.S. Naval base. In 1946, she enrolled at Washington State University and graduated with a Bachelor of Arts degree in Social Work. While at college she was affiliated with the Delta Zeta sorority and became president her senior year. In 1950, Marjorie was employed as a social worker with the Welfare Department in Wenatchee. Soon after, in 195, she married Kenneth L. Stevenson, who was a supervisor with the Department and they moved to Spokane, WA. She worked briefly in Spokane doing social work, then they started a family. Within two years, they welcomed a son, Craig, and daughter, Martie. A few years later the family moved to Kennewick, and then finally settled back in Wenatchee. After moving to Wenatchee, their third daughter, Linda, was born. Marjorie eventually went back to work in 1965 at Parsons Studios as a re-toucher and colorist and remained employed there for nearly 30 years. Marjorie was a 60 year member of Saddlerock Presbyterian Church and remained active in the Stemilt Hill Ladies Club. She maintained her garden and flowers, enjoyed her exercise group, lived independently and always had oatmeal chocolate chips cookies ready and waiting for all who visited until she was 92. Marjorie is survived by her children: Craig Stevenson (Diane), Martie Nielsen (Gerald), Linda Bradford (Bill), all of Wenatchee; grandchildren: Colton Bradford (Ashley),Levi Bradford (Cassidy), Brynn Nielsen (James Covey), Kelsey Jones (Zach), Holley Potter (Weston), three great-grandchildren: Liam, Addy and Harper; Brothers: Gene Chadderton and Bill Chadderton (Marlene). She was preceded in death by her parents: James and Edith Chadderton; husband: Kenneth L. Stevenson in 1988 and will be laid to rest next to him at the Wenatchee Cemetery. Marjorie will be deeply missed by all who knew her. She was an incredibly strong, passionate, intelligent and kind woman. Mom accepted what is, let go of what was, and had deep faith in what will be. She loved the Lord! A special thanks to Dr. Catherine Ridgeway for continued years of care and patience, Reese Bradburn P.A. for his compassion knowledge and great communication skills, CWH Nurse Louis, with whom she had an instant connection and loved when he played her Elvis Gospel music, and Deidre at Avamere for being the best Mama Bear you could ask for! Due to Covid 19, a simple graveside ceremony was held Friday June 5, 2020.

Marjorie L. Stevenson, 94 years old, of Wenatchee, WA passed away on May 28th, 2020 after a 3 week illness. She was born on November 24th, 1925 to Jim and Edith Chadderton of Stemilt Hill in Wenatchee, WA. Marjorie graduated from Wenatchee... View Obituary & Service Information

The family of Marjorie L. Stevenson created this Life Tributes page to make it easy to share your memories.