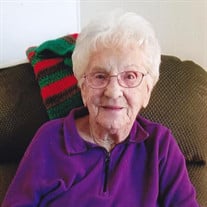 Mary passed away on December 2,2021 from congestive heart failure at the age of 99 years. She was born on July 15,1922 at Leahy, WA the 6th of 10 children born to George and Ruth (Campbell) Nilles. She was the last survivor of her siblings. Mary had an adventurous life as a child. She attended a country school , Ragged Butte, at Leahy where the Nilles children were considered a mischievous bunch. She had many funny stories to tell about their school days and some of the antics they pulled on their teachers! Mary met her future husband Loyd Eidson at a dance at Del Rio, Washington and she later said that he drove a little fast and was crazy but he swept her off her feet and they married on February 14, 1942. They had 58 wonderful years together. Their daughter Carol was born in 1943, their son Harvey in 1945 and Janet (Jan) followed in 1947. Mary worked very hard to make a good life for them. She worked outdoors alongside Loyd feeding and caring for the cattle. She often got up during the cold winter nights to monitor a cow who was in labor and helped to deliver the calf. She drove the wheat truck, cooked large harvest meals and did anything else that needed to be done on the farm. She really enjoyed horseback riding and for many years she rode to the pasture and rounded up the cattle. She made beautiful clothes for her children and made sure they had everything they needed. She strongly supported all of their school activities. She loved her children dearly. Mary and Loyd received the Douglas County Cattlemen of the Year Award in 1982. This was the first year a wife had been included in the award as Mary was also deserving of this honor for her dedication and hard work. She could look at a steer and tell you why it was or was not a great steer. Mary belonged to the Douglas County Cow Bells for several years and took part in other organizations. She loved to play cards and was quite good at it. She knitted afghans and slippers for family and friends and made many beautiful quilts which have become family heirlooms. In their later years Mary and Loyd sold the cattle, leased their farmland , and moved to town. Loyd was ill and Mary took care of him until she eventually had to place him in Harmony House at Brewster. He passed away in February 2000. Mary moved back to the farm but eventually sold the farm house and moved again to Mansfield where she spend the next several years before moving to Riverwest Assisted Living in January of 2021. Her children and grandchildren have fond memories of their grandmother taking care of them and letting them do almost anything they wanted. She loved her grandchildren and great grandchildren and was very proud of all of them. Mary delighted in going places with her daughter, Jan. She looked forward to road adventures to places that she had not been before, their lunch dates, and precious times together. Mary's health gradually became more fragile but she was determined keep walking and to get better. She was a real fighter. She is going to be missed but will always be in our hearts. She is survived by her daughters Carol (Doug) Gruber, Janet (Byron) Lee, and Penny (John) Nichols whom she always called her third daughter. Her grandchildren are Dean (Heather) Neff, Michele (Todd) Beld, Gail (Ray) Ball and Dan Gruber. She had 4 great grandchildren; Colby and Katie Beld and George and Cooper Neff. She leaves behind many beloved friends, nieces and nephews. She was preceded in death by her husband Loyd, her son Harvey, parents, and 9 siblings: Nettie, Lawrence, Frank, Lorena, Andrew, Clara, Ben, Henry, and George. A memorial service will take place on Saturday December 11, 2021 at the United Protestant Church in Mansfield, WA at 12:00 noon. Masks would be appreciated. A luncheon will follow at the Pioneer Club. The family would like to thank the wonderful staff at RiverWest Senior Living for their dedication and loving care of Mary. Also, a huge thank you to her neighbor Gary Heselwood for everything he has done to help Mary and the family.. If desired, memorials may be sent to the Mansfield Museum P.O. Box 274 Mansfield WA 98830 or to a charity of your choice.

Mary passed away on December 2,2021 from congestive heart failure at the age of 99 years. She was born on July 15,1922 at Leahy, WA the 6th of 10 children born to George and Ruth (Campbell) Nilles. She was the last survivor of her siblings. Mary... View Obituary & Service Information

The family of Mary J. Eidson created this Life Tributes page to make it easy to share your memories.

Mary passed away on December 2,2021 from congestive heart failure...