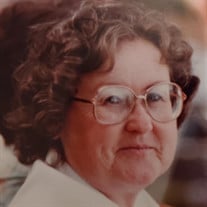 Mary J. Sell was born in Depew, Creek County, OK, on September 28, 1928, and was the youngest of nine children. Mary married her lifelong sweetheart, Ray Sell, on June 24, 1944, in Turlock, CA. On February 28, 2020, Ray held his hand out for Mary to join him in heaven and she passed away. She and Ray were married 67 years until he passed away on October 16, 2011. The couple moved to Wenatchee in 1947, and raised three children, Judy, Jim and Susan. Ray worked for Alcoa and Mary was a hostess at Eddie Mays Inn. In 1970, they and a business partner purchased 33 acres of land and planted 20 acres in apples. Mary worked in their orchard and drove the tractor when needed. Mary was preceded in death by her husband, Ray; daughter, Judy; son, Jim (Pam Ogle of East Wenatchee); grandson, Chad Styles of Wenatchee; and her brothers and sisters. She is survived by her daughter, Susan Stockwell (Jay Stockwell), Wenatchee; grandson, Tyler Stumke; and great-granddaughter, Kailea Rae, both of North Augusta, SC. A memorial service will be held at 11:00 AM, Friday, March 6, 2020, at Jones & Jones & Jones-Betts Memorial Chapel, 302 Ninth St in Wenatchee. Mary’s family would like to give a special thank you to the staff at Highgate Senior Living.

The family of Mary J. Sell created this Life Tributes page to make it easy to share your memories.