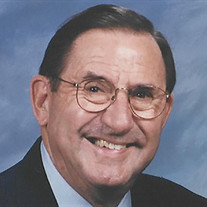 Beloved husband, father and grandfather Melvin H. Johnson died peacefully on Saturday December 28, 2019 at his home in Wenatchee, Washington after a long battle with Parkinson’s Disease. Mel was born on July 4, 1931 in Portland, Oregon to Harry Johnson and Bertha (Weiss) Johnson. His first marriage was to Louise Anne (Hartman) Johnson, a ski industry executive. They initially resided in Vancouver, WA, later moving to Wenatchee, WA, then to Geelong, Australia, and ultimately returning to Wenatchee. Mel married Donna Marie (Lafreniere, Boswell) Johnson of Wenatchee in 1978, and they enjoyed traveling, entertaining and their combined family of five children and nine grandchildren. Mel served in the Oregon National Guard (1950-1953) and in the Army during the Korean War (1953-1954), when he was stationed at White Sands Proving Ground. After graduating from Oregon State University in 1956, he began his career at Alcoa, where he worked for 38 years in Vancouver Washington, Australia, and Wenatchee. At Alcoa, Mel served as a process engineer and smelter startup specialist, helping launch new facilities in Quebec, Australia, Kentucky and Missouri. After retiring in 1994, he worked as a consultant in the aluminum industry, with projects in Siberia, New Zealand, Australia, and Brazil. He and Donna lived in Portland Australia for 2 years, making many lifelong friends. Mel was an active athlete for most of his life, who especially enjoyed hiking in the Cascade Mountains, skiing and tennis. He was active in the community, serving as President of the Wenatchee Racquet and Athletic Club, the Rotary Club, the Central Washington Hospital Foundation and the YMCA, and on the board of Directors of the United Way. He also was an avid gardener known for his beautiful tomatoes and artfully trimmed evergreens, a lover of fine wines from Australia and Washington State, and an accomplished grill master. Mel is survived by his beloved wife, Donna; their children, Stacy and Steve Pruss of Sammamish, Washington, Jay and Marcia Boswell of Sammamish, Washington, Shad Boswell of Taos, New Mexico, Greg and Susan Johnson of Avon, Colorado, Kit and Joe Pogliano of San Diego, California and nine grandchildren (Dane Utigard, Jake Utigard, Tessa Utigard, Cassie Utigard, Tyler Boswell, Kristina Boswell, Joseph Boswell, Nicolas Pogliano, and Sofia Pogliano). Mel was loved by many and known for his warmth, positivity, kindness and gentle humor. He will be greatly missed. A special thank you to the loving caregivers and doctors who took great care of Mel and the family. In lieu of flowers, the family would be grateful for memorial contributions to the Rotary Foundation (https://www.rotary.org/en/donate). Friends and family may visit Jones & Jones – Betts Funeral Home, Wenatchee, WA on Friday, January 3, from 2-6 PM. Please express your thoughts and memories on the online guestbook at jonesjonesbetts.com. A private celebration of life will be held at a time to be announced.

The family of Melvin Johnson created this Life Tributes page to make it easy to share your memories.