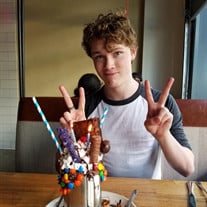 Michael "Mikey" "Mel" Eric Lindblom died protecting others on Saturday, December 11, 2021 at the age of 24. His home is now heaven with his daddy. Mel was born in Wenatchee, WA on July 21, 1997. He grew up in the Wenatchee Valley and moved to Post Falls where he graduated from high school. Michael was born a protector. His twin brother Shawn needed to be by his side at the hospital since Michael was the only one that could stop him from crying. The connection that Shawn and Michael carried through their life. Lots of mischief, talking, laughing, snuggles, and a special love that only twins share. He is so desperately missed by his twin Shawn. Mel loved life and people and was unapologetically himself. He showed compassion to others and would help anyone no matter the circumstances and regardless of good or bad situations. He wasn't afraid to be himself, but mostly he just wasn't afraid. He would step into bad/dangerous situations to protect others from being hurt. He had a big, huge heart that only God could give him. God gave him the strength and knowledge to endure his mission on earth. He walked the streets of Seattle and Spokane the last 6 years being the hope, the light, and the love to the broken hearted and befriending those in need. He showed them grace and unconditional love. He did what he had to do to meet them where they were, never judging them. Mel understood the struggles others went through and made it his life's work to bring joy and hope to the people. He said "there's a lot of people who have heavy burdens they can't carry, but I can take their burdens and carry them so they don't have to" and that is what he did. Mel was a true example of what it meant to live like Jesus. He walked the city streets, while Jesus walked the dusty streets, and he walked a path very few could walk. He protected others, despite the suffering he knew he would endure. He was the hands and feet of Jesus, walking 6-7 miles a day on blistered, calloused, and hurting feet to reach those who needed him. He once said he knew he could live homeless if he ever needed to. Not because he thought he wouldn't have a place to go, but because he knew he'd have to spend nights or weeks on the street taking on the burdens of those who needed someone to love them. Mel would go days without eating, showering, having a bed to sleep in so he could be out there, reaching the people who needed him. He spent the day before he died helping a man get things ready so he could go to rehab and spent his last night talking with someone and sleeping in their car in 20 degree weather. Everyone he met was his friend, and he showed them they were loved. He cared for them. He was fearless. Never afraid of meeting a stranger. We should all be a little more like Mel. As Mikey would say "Just Love". Mel is survived by family that loved him dearly. His mother Kim Lindblom (Wray Cartwright) of Spokane; siblings Marie West (Mike) of Wenatchee, Jenney Lindblom of Nashville, Phill Galey (Miranda Keller) of Spokane, Thomas Lindblom of Boise, Davey Lindblom (Courtney Heinz) of Spokane, and his twin brother Shawn Lindblom of Seattle; nephews Kellen and Cooper Lindblom of Spokane. He was preceded in death by his father Jerry Lumsden. A funeral service will be held at Jones & Jones Funeral Home in Wenatchee, WA at 2:00 pm on Tuesday, December 21, 2021. Viewing will start at 1:00 pm before the funeral. There will be a lighted lantern service for him in the next couple of months in the Seattle area. Please contact family members on location and time. It will be announced on social media when it is organized.

Michael "Mikey" "Mel" Eric Lindblom died protecting others on Saturday, December 11, 2021 at the age of 24. His home is now heaven with his daddy. Mel was born in Wenatchee, WA on July 21, 1997. He grew up in the Wenatchee Valley and moved... View Obituary & Service Information

The family of Michael Eric Lindblom created this Life Tributes page to make it easy to share your memories.