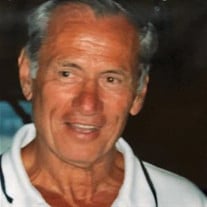 Mike Peter Michael of East Wenatchee passed away on May 12, 2019, at the age of 92. He was born in the small village of Qyteza, Albania, on September 20, 1926, to the late Peter Michael and Vita Doces Michael of Seattle. Mike immigrated with his family to the United States when he was 9 years old and grew up in Seattle, attending Lincoln High School where he played football, basketball and baseball. In 1943, as a sophomore, he famously kicked his first field goal with 15 seconds left in the game against Roosevelt to break a scoreless tie and win the game. Lincoln continued on that year to win the Seattle High School Football Championship for the first time since 1919. Mike joined the Navy during World War II while still in high school, and returned to Lincoln to graduate in 1947. He attended the University of Washington where he played football as a center for Coach Howie Odell, served as Co-Captain in 1950, and earned All-Pacific Coast Honors. A lifelong loyal Husky, he was a season ticket holder and Tyee for decades, attending most home games through last season. Mike graduated from the UW School of Dentistry in 1955 where he belonged to Omicron Kappa Upsilon, an honorary dental society. On a blind date he met Joanne Brown, his devoted wife of 62 years. They moved to East Wenatchee where he practiced dentistry before returning to UW to study orthodontics. He then enjoyed working on youthful smiles for over two decades. Away from work, Mike loved spending time with family and friends at his cabin on Lake Chelan, which he helped build. He also enjoyed handball, racquetball, golf and all kinds of fishing (especially at Chelan). In 1960, he broke the course record at the Wenatchee Golf and Country Club on his way to winning the Club Championship. His love of sports and working with kids drew him into coaching Little League Football, Basketball, and Babe Ruth Baseball for many years. He also served on the Local Selective Service (Draft) Board. Mike is survived by his wife Joanne; children Karin Bolton, Florida; Peter Michael, Idaho; Tom Michael (Vicki), East Wenatchee; Cami Johnson (Kris), Seattle; Larry Michael, East Wenatchee; Amy Norman, Truckee CA; 11 grandchildren including Neill Mathes, Chris and Matthew Bolton; Travis and Colin Michael; Petra and Alek Michael; Kate, Jack and Emilie Johnson; Trent Norman; and 3 great-grandchildren. He is also survived by two sisters, Emily Odegard, Olympia; and Violet Sperry (Don) Vancouver WA; brother-in-law Mel Brown (Ardeth), Portland; and numerous nieces and nephews. At his request there will be no services. A Celebration of Life will be held on July 20. Friends who wish may make donations to the charity of their choice.

Mike Peter Michael of East Wenatchee passed away on May 12, 2019, at the age of 92. He was born in the small village of Qyteza, Albania, on September 20, 1926, to the late Peter Michael and Vita Doces Michael of Seattle. Mike immigrated with... View Obituary & Service Information

The family of Mike P. Michael created this Life Tributes page to make it easy to share your memories.