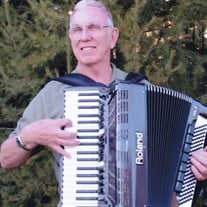 Paul Allen Francis was born in Everett, WA, on July 28, 1938 to Kenneth and Velva (Clark) Francis. He passed away on Saturday, April 30, 2022. Paul moved to the Wenatchee area with his parents when he was 5 years old. He was raised in Nahahum Canyon until 1956. He graduated from Cashmere High School in 1956. Following the family tradition, he joined the Navy, after first attending the Naval Reserve while still in high school. He served aboard the USS Braine, DD630 and the destroyer Alvin C. Cockrell as they did their yearly tours of Pacific Islands and the Orient. Upon returning to Cashmere, he worked at Schmitten Lumber Co. and later attended Walla Walla College graduating in 1966. He worked briefly as a third grade teacher, a pipe stripper at Columbia Concrete Co. and for 32 years at Tree Top at Cashmere Tree Top. He married Mary Laine Hampton, the love of his life in 1985. During the 36 years they traveled around the United States, especially Hawaii and Alaska, and Bandon, OR and a cruise to Europe. They started square dancing with the Appleland Promenaders, Buds and Blossoms and Cascade Twirlers. Paul enjoyed playing his Roland accordion, though he never felt good enough to play for Church or square dancing. Paul kept his faith anchored in Jesus and he and Mary Laine attended Calvary Bible Church every week until pain from spinal surgery and cancer became too much. Preceding Paul were his parents, Kenneth and Velva Francis. Survivors are his wife, Mary Laine of East Wenatchee; brother-in-law and sister-in-law, David and Elizabeth Hampton of East Wenatchee; sisters-in-law, Velma Hampton of East Wenatchee and Patricia Green of Phoenix, AZ; cousins, Bernice and Fred Whipple of St. Paul, MN., Delores and Monroe Chapman of East Wenatchee, Karen and Donna Francis of Everett, WA.; several nieces and nephews; and also very special friends, Randy and Shelia Ogle of Wenatchee and Monique, our dog. We would like to thank the Hospice nurses and workers for the care Paul received. Paul's graveside service with military honors will be at 10:00 am at Evergreen Memorial Park in East Wenatchee for family and friends on Saturday, May 14, 2022. A memorial service will be at 12 Noon at The Calvary Bible Church, 605 1st St in Wenatchee, WA with a reception following in the fellowship hall.

Paul Allen Francis was born in Everett, WA, on July 28, 1938 to Kenneth and Velva (Clark) Francis. He passed away on Saturday, April 30, 2022. Paul moved to the Wenatchee area with his parents when he was 5 years old. He was raised in Nahahum... View Obituary & Service Information

The family of Paul A. Francis created this Life Tributes page to make it easy to share your memories.