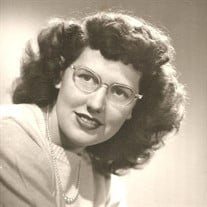 Peggy Louise (Marr) Duncan, 90, died at home, in the presence of her loving family, on June 15, 2019. She was born at Deaconess Hospital in Wenatchee on September 14, 1928, to Wilbur Gilford Marr and Zella Adelia (Zimmerman) Marr, the youngest of six children. After she was born, her parents took Peggy home to their ranch in East Wenatchee, on which they grew apricots, peaches, and cherries. She grew up surrounded by loving parents and siblings. Peggy went to primary and secondary school in East Wenatchee and Wenatchee, followed by a year at a local business college. At school, she made many friends with whom she would maintain close ties for decades. The group, who called themselves “The Nine,” would meet regularly for lunch. In April of 1947, Peggy met Ronald Burton Duncan at a basketball tournament in Seattle. They married at Brethren Church in Wenatchee on August 7, 1948. The newlyweds settled at Peggy’s mother’s ranch in East Wenatchee before buying their first home on Eastmont Avenue and starting a family. In December 1954, the Duncans moved to the house they would share for the next 64 years, and where they would bring up their five children. While raising a family, Peggy worked as a secretary and legal secretary. During the course of her professional life, she worked for the law firms Hughes and Jeffers, and Scott and Cordell; Meenach Insurance Agency; Northwest Data; and Skookum, Inc. Peggy was preceded in death by her parents, Wilbur and Zella Marr, and by her siblings James Marr, Helen Mulloy, Edna McCandlish Standerfer, Ethel Turnipseed, and Emerson Marr. She is survived by her husband of nearly 71 years, Ronald Burton Duncan; by their children Cheryl (Douglas) Mehl, Burt (Andi) Duncan, Todd (Ronda) Duncan, Lisa (Rick) Frisk, and Greg (Cheryl) Duncan; by their grandchildren Joel Duncan, T.J. (Stephanie) Duncan, Mehgan Jones, Nathan (Travis) Ottosen, Kiera (Silas) Bowler, Peter (Cynthia) Duncan, Sarah (Aren) Magnussen, Jayme Hoglund, Mallory Ottosen, Drew (Danielle) Duncan, Garrett Duncan, Lynsey Duncan, and Amy Duncan; and by 24 great-grandchildren. Peggy’s greatest source of joy was her large family. She enthusiastically cheered for her children at all of their sporting events, and later relished babysitting her grandchildren and attending their birthday parties and school graduations. Holiday gatherings, when her house was full of family talking and laughing together, were times of intense happiness for Peggy. After retirement, she enjoyed drawing (a talent she had nurtured since her youth), doing crossword puzzles, and getting together with her friends from her school days. Peggy will be remembered by those who knew and loved her as generous, thoughtful, and kind. She was a cherished mother, grandmother, and great-grandmother, who will forever be missed. Friends and family may visit Jones & Jones – Betts Funeral Home on Wednesday, June 19 from 5:00 pm to 7:00 pm. Peggy’s life will be celebrated on Thursday, June 20 at 1:00 pm at Jones & Jones – Betts Memorial Chapel, 302 9th Street, Wenatchee. Entombment will follow at Evergreen Memorial Park, 1301 10th Street NE, East Wenatchee, followed by a reception in the Banquet Room at the Wild Rivers Inn, 580 Valley Mall Parkway, East Wenatchee. In lieu of flowers, donations may be made in Peggy’s name to the Wenatchee Valley Humane Society at www.wenatcheehumane.org/memorials.

Peggy Louise (Marr) Duncan, 90, died at home, in the presence of her loving family, on June 15, 2019. She was born at Deaconess Hospital in Wenatchee on September 14, 1928, to Wilbur Gilford Marr and Zella Adelia (Zimmerman) Marr, the youngest... View Obituary & Service Information

The family of Peggy Louise Duncan created this Life Tributes page to make it easy to share your memories.