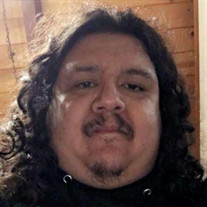 Ramon Chavez May 11, 1984 - March 16, 2019 Ramon Chavez was born to Fidelina Garcia and Pedro Chavez May 11, 1984. He was the first born son and would later be joined by 3 younger brothers. Around the time Ramon was 7 his family moved to Royal City, WA where Ramon attended elementary school while his parents worked long hours in the fields. When Ramon was 13 years old the family moved to Wenatchee, WA following the devastating loss of Ramon’s father to cancer. Ramon called Wenatchee home for many years to follow but also spent a significant period of time in Phoenix, Arizona. He attended Orchard Middle School and Wenatchee High School and later went on to work for many local packing sheds and factories in the Wenatchee Valley. Ramon welcomed his daughter Abbigail Mai-Lisa into the world in 2005, his son Ramon Pedro Jr. in 2007 and Adrian Luis in 2009. His children were his motivation and his ultimate goal in life was to ensure they were loved and cared for in the best way possible. Ramon lived in New York State for 2 years where he made lifelong friends and family. He made a big name for himself in the music industry and founded his own label, WA State Entertainment.Over the years Ramon’s passion for the I-502 industry along with his natural gift of a CEO mindset led him to a successful career in the I-502 industry in California. In 2011, following his return from New York and with a fresh focused goal-oriented mind, Ramon met his wife, Sonia and they began their journey together. They enjoyed many wonderful memories together including a special recent trip to Hawaii. Ramon and Sonia were actively planning their lifelong future together with their 7 children. While recovering from a tragic accident, Ramon fell ill and passed away at USC Davis Hospital in Sacramento California March 16, 2019 with his wife by his side. Ramon was preceded in death by his father, Pedro Chavez and grandmother Eraclia Gracia Pineda. He is survived by his children, Abbigail, Ramon and Adrian Chavez, Luz, Jda, Eva, and Lea Casillas; his wife, Sonia Casillas, Mother Fidelina Garcia, and brothers Mauro Chavez, Jaime Chavez and Manuel Mendez Jr. He leaves behind many who loved him dearly.

The family of Ramon Chavez created this Life Tributes page to make it easy to share your memories.