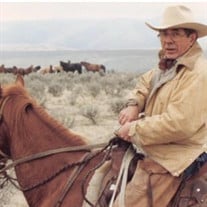 Dick Blue passed away quietly on August 2, 2020, under the care of hospice. Dick was born on September 16, 1928, in Ford, WA, to his parents, Gage and Nell Blue. Raised in the early years of the Great Depression, sharing humble beginnings, like... View Obituary & Service Information

The family of Richard Gage Blue created this Life Tributes page to make it easy to share your memories.