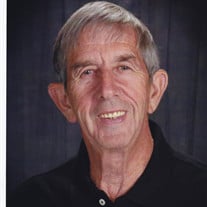 Wenatchee – Richard N. Goodman, 84, died May 25, 2021 following an extended illness. He was born March 12, 1937 in Milton-Freewater, Ore., the youngest son of Linn and Lucille Goodman. Dick graduated from Oroville High School in 1955 and served as Student Body President that year. He married his high school sweetheart, Wilma Stewart, in that same year. Dick and Wilma lived and worked in Oroville, Wash., until they moved to Wenatchee where Dick attended Wenatchee Valley College (“WVC”). After two years at WVC they took their three small children to Seattle where Dick attended Seattle Pacific Univ., graduating in 1965 with a teaching certificate. Dick began his long teaching career in Coulee City, Wash. and continued it with tenures in Oroville, Chelan, Wash., and Wenatchee. Over his decades of teaching, he touched the lives of thousands of students. He was famous for his field trips, annual chick-hatching project and shop classes. In 1973, Dick bought a muffler shop and gas station on South Wenatchee Avenue, Dick’s Exhaust, which he ran for 17 years before he sold it and returned to teaching, his first love. Wilma passed away in 1983, making Dick a young widower. In 1984 he met Janice McCafferey. They married in 1985 and Dick embarked on helping to raise his second family. Dick and Janice and her two children lived in Wenatchee and Chelan, where the owned a successful bed and breakfast. Dick and Janice spent their years together as avid high school sports fans and surrounded by a large group of friends. They were long-time members of the Free Methodist church. Janice passed away in 2015, making Dick a twice-over widower, but having had the great fortune to have married two remarkable women. Dick was a simple, humble man who loved his family, his friends and his Lord. He was a voracious reader, loved travel and exploration, and every kind of sport. He loved meeting new people and embraced their cultures, religions and opinions. He never had a harsh word for anyone. He could build a house and rebuild a carburetor. He could make a skateboard or an ice-sailing racer. He only bought one new car in his life because he knew he could keep it running forever. In addition to his parents, he was predeceased by four brothers, one infant sister, wives Wilma Goodman and Janice Goodman, and grandson Brandon Goodman. He is survived by children and stepchildren Tim Goodman (Stacy) of Issaquah, Wash., Jan Hamblen (Tim) of Marysville, Wash., Jon Goodman (Cathy) of Redmond, Wash., Janelle Carlson of Wenatchee, and Jeff Carlson (Megan) of Cashmere, Wash. He leaves behind 16 grandchildren and 22 great grandchildren.

The family of Richard N. Goodman created this Life Tributes page to make it easy to share your memories.