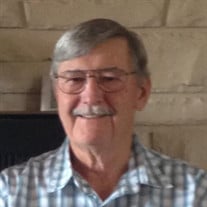 Richard Lynn Lowther, 68, passed away on November 1, 2021, after a courageous battle with pancreatic cancer. Lynn was born in Moses Lake, WA, to Dick and Phyllis Lowther in September, 1953. He attended Knolls Vista Elementary, Frontier Jr. High and Moses Lake High School where he graduated in 1972. He wrestled in junior high and played football in both junior high and high school. He started working for his Dad at B & D Automotive when he was in 7th grade, and he worked at Jules IGA during his senior year of high school and the following year while attending Big Bend Community College. In October, 1973, Lynn joined the United States Air Force. During his years of service, he was stationed at Lackland Air Force Base in San Antonio, TX, Keesler AFB in Biloxi, MS, Luke AFB in Glendale, AZ, Patrick AFB in Cocoa Beach, FL, and at Osan Air Force Base in South Korea. He served in the Avionics Maintenance Squadron working on the F-4C Phantom fighter jet as well as other aircraft and helicopters. He was also trained as an Avionics Communications Specialist. Lynn was honorably discharged from the Air Force in June, 1977. From 1978 to 1980, Lynn attended Spokane Community College, receiving his AAS Degree in Electronics Technology. He then went to work for Western Telecommunications Inc. in Spokane. In 1985, Lynn began working for Grant County P.U.D. as an engineering intern, and in 1986 he was hired full time as an Electronics Technician working in Ephrata and at Wanapum Dam. In 1997, he started working for Douglas County P.U.D., retiring from there in 2016. Lynn met his future wife, the love of his life, Theresa Wolfe, on a blind date in February, 1991. They were married August 13, 1994, and lived in Moses Lake until moving to Wenatchee in 1998. Lynn and Theresa enjoyed spending time with friends and family, traveling (especially road trips) and camping. Lynn loved his time on Lake Roosevelt and in northern Idaho. Some of their favorite trips were cruising the Panama Canal and the Caribbean and their trip to Maui. Lynn was diagnosed with pancreatic cancer in May of 2019. He fought a good, hard fight for two and a half years receiving excellent care from Dr. Julia Moukharskaya, and the staff and nurses in the Oncology Department and Infusion Room at Confluence Health, Wenatchee, as well as CWH Hospice. Lynn will be greatly missed by his family and friends. Lynn is survived by his loving wife, Theresa, mother, Phyllis Lowther, sisters Julie (Jerome) Geerdes and Kerry (Tim) Harvey, niece Jennifer (Justin) Casey, nephews Scott (Stephanie) Geerdes, Brandton Harvey and Blayne Harvey, great nephews Beckett Geerdes and Jaymeson Casey, and great nieces Josephine Casey, Riley Rockensock and Kaelen Rockensock. Lynn was also greatly loved by all of Theresa’s family. He was preceded in death by his father, Dick Lowther. A Celebration of Life will be held Thursday, November 18, 2021, at 2:00 p.m. at the Best Western Plus Lakefront Hotel (formerly the Hallmark Inn), in Moses Lake.

The family of Richard Lynn Lowther created this Life Tributes page to make it easy to share your memories.